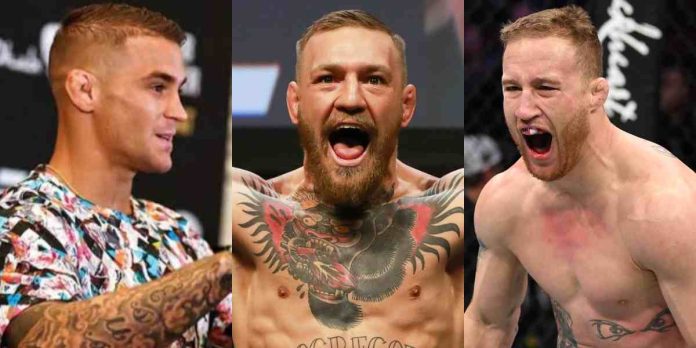 McGregor is coming off back-to-back losses to Poirier at UFC 257, and UFC 264, where he lost by a doctor’s stoppage after breaking his tibia seconds before the end of the first round. ‘The Notorious’ is eyeing a return to the Octagon by the end of this year, and wants to fight for the welterweight title, although he isn’t short of options.

Dustin Poirier On McGregor vs Gaethje

Charles Oliveira is campaigning for a vacant lightweight title fight against the Irishman, whereas Dana White believes Michael Chandler would be a great opponent. Speaking on the DC & RC show on ESPN (as transcribed by MMA Junkie), Poirier threw Gaethje’s name in the mix, saying that he’d be the perfect comeback fight for his arch-rival.

“Justin Gaethje versus the return of Conor McGregor,” Poirier said. “The hype, the buildup, somebody’s going to sleep. I mean, you’re tuning in for a car wreck, a head-on collision, and I want to see it.”

Poirier also revealed who he thinks his teammate, Mateusz Gamrot, should fight next after his win over Arman Tsarukyan at UFC Vegas 57.

“Beneil Dariush – this is a curveball – versus Gamrot, a guy who I train with, who’s breaking into the rankings, who’s a great grappler, who needs to prove himself against a veteran – and that’s the fight,” Poirier said. “That’s going to be a fun matchup. I think it’s going to be a lot of scrambles. Dariush is going to have trouble getting him down, and if he does, he’s got his hands full there.”

Who do you think would win a potential fight between Conor McGregor and Justin Gaethje?