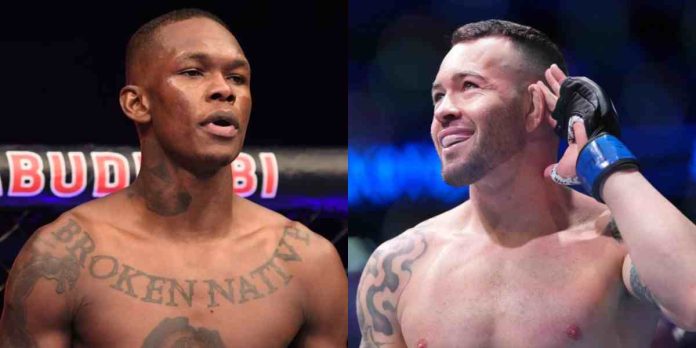 Chael Sonnen has explained why he thinks Colby Covington should be allowed to move up to middleweight and challenge Israel Adesanya for the title.

Covington maintained his number one contender’s spot at welterweight by scoring a dominant win over Jorge Masvidal at UFC 272, but having already lost twice to champion Kamaru Usman, it could be a while before ‘Chaos’ gets a third crack at his nemesis. ‘The Nigerian Nightmare’ is projected to defend his title against Leon Edwards next, while Gilbert Burns vs Khamzat Chimaev at UFC 273 will be a number one contender’s fight, according to Dana White.

With a welterweight title fight currently out of his reach, Covington said that he is open to moving up in weight and challenging Adesanya. Speaking to Helen Yee ahead of Eagle FC 46 (as transcribed by BJPenn.com), Sonnen explained why Colby would be an intriguing matchup for ‘The Last Stylebender’.

“Colby made a suggestion, I’m gonna take that golden ticket, [and] I’m gonna go to 185 pounds. I think he should be allowed to do it,” Sonnen said. “You cannot be a number one contender and not get a title shot. It’s not right. I want to see Colby Covington fighting Izzy Adesanya. Quite frankly Izzy Adesanya needs somebody that’s gonna meet him halfway.

“I think that Adesanya is also a master. I think he’s a master entertainer on the way to the ring. What he does and before he leaves the microphone behind. He needs somebody that can match him. Robert Whittaker left him hanging, didn’t want to meet him halfway. [Jared] Cannonier is not gonna meet him halfway. [Adesanya and Covington] need each other right now. They can form a partnership, and they can go do some business.”

Although Covington is interested in a potential fight against Adesanya, Dana believes he doesn’t deserve a middleweight title shot after having lost twice to the welterweight champion. The Nigerian-New Zealander also dismissed the idea, calling the Miami native ‘dumb’ for calling him out.