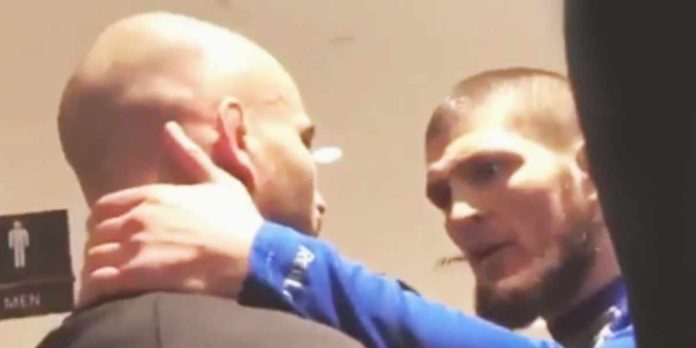 Artem Lobov has shared details of his infamous hotel altercation with Khabib Nurmagomedov and his teammates during the UFC 223 fight week in 2018.

The rivalry between Khabib and Lobov’s teammate Conor McGregor began in 2016, when the Irishman bypassed him to take on Eddie Alvarez for the lightweight title at UFC 205, where he won by second round TKO. ‘The Eagle’, who beat Michael Johnson on the same card, referred to the Dublin native as a ‘chicken’ in his post-fight interview.

Khabib’s remarks angered Lobov, who said that calling someone a ‘chicken’ is “one of the biggest insults you can give a man in Russia”. ‘The Russian Hammer’ continued to take jabs at the Dagestani for the next two years until the two ran into each other during the UFC 223 fight week in 2018, where the SBG Ireland representative was cornered.

To avenge his best friend, McGregor flew all the way to New York from Dublin and attacked a fighter bus with Khabib and other fighters on board after the UFC 223 media day.

Artem Lobov On Confrontation With Khabib

Speaking to Severe MMA, Lobov claimed that Khabib was more aggressive when he was surrounded by his teammates compared to when he confronted him alone.

“Khabib came up to me alone and he started saying all this to me, ‘What are you saying?’ I said, ‘Khabib hold on a second,” Lobov said. “If somebody would call your brother a chicken, would you have answered something to him?’ And he was like, can’t really say anything cause he knew I was right. So he turned around and went away.

“So I picked the phone back up and continued my interview. But then a minute or two later Khabib comes back with fifty… I don’t know whatever, how many guys were there. He comes back and suddenly he is changed. Now I’m telling him the exact same thing again like, ‘You would have done the same thing.’ And he is asking me the same question over and over.”

Khabib won the lightweight title by beating Al Iaquinta at UFC 223, and made his first successful title defence by finishing Conor McGregor in the fourth round at UFC 229.