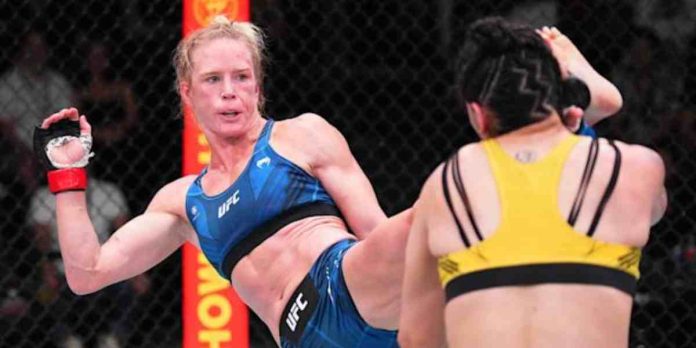 Holly Holm was as surprised as the majority of MMA fans when Bruce Buffer declared Ketlen Vieira the winner in the UFC Vegas 55 main event this past weekend.

Holm was looking to cement her place as the number one contender with a win over Vieira this past weekend, and she believed she had done enough until the result was declared, and the Brazilian was announced the winner by split decision.

‘The Preacher’s Daughter’ controlled the action and landed almost twice as many shots as her opponent, but Vieira landed the harder shots, which certainly influenced the judges. With back-to-back wins over two former bantamweight champions in Holm and Miesha Tate, ‘Fenomeno’ has put herself in a very strong position to fight for the title next.

Holly Holm Feels She Was Robbed

Holm didn’t agree with the judges, of course. During the UFC Vegas 55 post-fight press conference (as transcribed by MMA Junkie), the veteran fighter said that she believes she won every round except for the second.

“I thought I won the fight,” Holm said. “I gave her round two, and I feel like I won all the rest of the rounds. I always feel like I can do more and be more perfect, but I thought I won the fight. I don’t feel like it was a question. I think the more we were worried about her trips and stuff, and I was able to kind of shut them down. I wanted to obviously be more active in the clinch. She made that a little difficult because she’s got a pretty good whizzer and everything. But I was still able to control her in those areas and get some strikes off.”

Do you agree with Holly Holm?