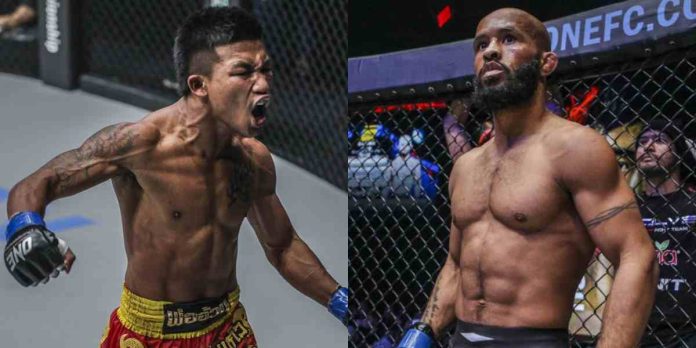 The special rules bout between the consensus flyweight GOAT and the Muay Thai phenom is set for four, three-minute rounds, alternating between Muay Thai and MMA. The first and third rounds will be under Muay Thai rules, which will favour ‘The Ironman’. In a recent interview, Brooks said that he believes ‘Mighty Mouse’ will survive the first round and submit his opponent in the second round, which will be contested under MMA rules.

Adriano Moraes and Christian Lee On Rodtang vs Johnson

Speaking to ONE Championship, Moraes said that he also sees Johnson’s grappling skills overcoming Rodtang’s fiery striking, but stated that he’s really excited for the fight.

“Rodtang is a Muay Thai superstar, an athlete on the rise,” Moraes said. ”I believe DJ will survive Rodtang’s Muay Thai in the first round and will submit him in the second round. I believe the fight will unfold this way. My prediction is DJ by submission in the second round. It’s a fight that really excites me. I’m looking forward to seeing this fight. I am very happy to be part of this card. I’ll be able to watch this fight live.”

Brooks and Moraes aren’t the only ones who believe Johnson will dominate Rodtang in MMA rounds. Christian Lee also predicted that ‘DJ’ will finish the Thai sensation in the second round.

“I see that as a really good fight for DJ,” Lee said. “Taking nothing away from Rodtang, I think it would have been better for him if it was strictly a Muay Thai match. DJ has had how many championship-level fights? There’s no way anyone’s going to come in there and knock him out in three minutes. Then when it goes to the MMA round, it’s a lot harder for Rodtang to adjust to DJ’s skill level in wrestling and in jiu jitsu. It’s probably going to end as soon as it switches over.”

Moraes, who is coming off a huge second round knockout victory over Johnson at ONE on TNT 1 last year, will also feature on ONE: X, where he will defend his flyweight crown against Yuya Wakamatsu. Lee is coming off a split decision loss to Ok Rae Yoon in their lightweight title fight at ONE: Revolution, and is eyeing an immediate rematch.

Do you agree with Adriano Moraes and Christian Lee?