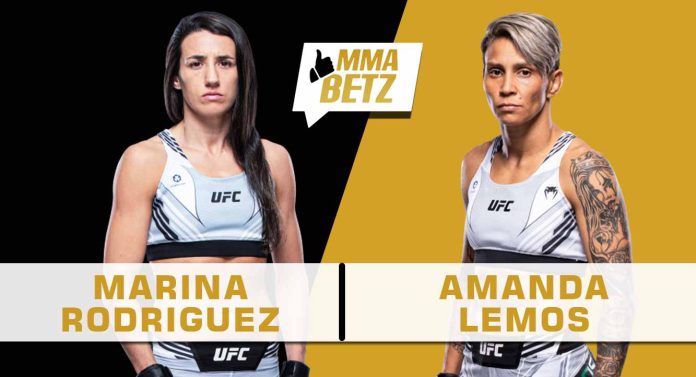 UFC Vegas 64 goes down this weekend at the UFC APEX in Las Vegas. In the main event, Marina Rodriguez takes on Amanda Lemos in a potential strawweight title eliminator.

Rodriguez is currently riding a four fight winning streak, with her most recent win coming against Yan Xiaonan. Whereas Lemos bounced back into winning ways in her most recent fight against Michelle Waterson.

Rodriguez is a high-volume striker with excellent Muay Thai skills. Lemos is a striking specialist as well, with excellent kicks and knockout power, which is rare for her division. Rodriguez is slightly more technical however and will have the edge in an all-out striking contest due to her distance management and counter striking, which will come in handy against a power puncher like Lemos.

Statistically, Rodriguez is slightly better as she lands a little over five significant strikes per minute on average, whereas Lemos lands a little under five. Rodriguez has better defence also as she absorbs three significant strikes per minute on average, whereas Lemos absorbs over four. Lemos has better grappling stats overall. She averages more takedowns per fight, has better takedown accuracy and defence and attempts more submissions than her opponent, who doesn’t like to take the fight to the ground. If Lemos wants to win this one, she has to mix things up.

Lemos has never fought in a five round contest before, whereas Rodriguez has fought twice and proven that she has the durability and gas tank to go the distance with a steady output throughout. Lemos is a tough fight for Rodriguez, but expect the latter to continue her winning ways at UFC Vegas 64.

Who do you think will win the strawweight main event between Marina Rodriguez and Amanda Lemos?