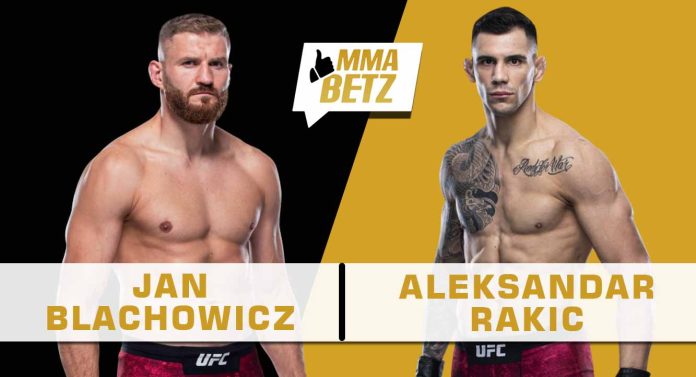 UFC Vegas 54 goes down this weekend at the UFC APEX in Las Vegas. In the main event, former light heavyweight champion Jan Blachowicz takes on Aleksandar Rakic in a potential title eliminator.

Blachowicz is looking to bounce back into the win column after a second round submission loss to Glover Teixeira in their light heavyweight title fight at UFC 267, whereas Rakic is looking to turn his two-fight winning streak into a three-fight winning run with an impressive win.

Rakic is a very well-rounded fighter who combines dynamic kickboxing with strong wrestling. Blachowicz is also a very well-rounded combatant who is a strong technical striker and a very credible grappler. Blachowicz has vicious knockout power in his strikes. Rakic does possess knockout power as well, but he has become prone to stalling techniques, something he is heavily criticised for by fans.

The Austrian loves to fight at distance and control the pace, but Blachowicz’s calculated aggression will pose a major threat to him. ‘The Prince of Cieszyn’ has performed well against rangy strikers in the past, so a matchup with Rakic is fairly favourable for him. Both fighters are patient, but Blachowicz might be the aggressor in this one because he wants to bounce back in a big way after his loss to Teixeira. Rakic will try to frustrate his opponent and make him overextend and look to counter attack.

Statistically, there isn’t a huge difference between the two. Rakic lands a little over four significant strikes per minute on average, whereas Blachowicz lands close to four. Rakic absorbs a little over two strikes per minute on average, whereas Blachowicz absorbs close to three. Both fighters have solid grappling as well, with stats being slightly in favour of Blachowicz, who lands more than one takedown per 15 minutes, whereas Rakic lands less than one. Blachowicz also has a better takedown accuracy. ‘Rocket’ has a very impressive takedown however.

Blachowicz is a lot more experienced than Rakic, especially when it comes to UFC main events. He certainly has enough gas in his tank to go all five rounds, but at 39-years-old, some wear and tear can be expected. Rakic on the other hand is nine years younger and is a lot fresher.

It’s an incredibly tough fight to pick, but expect Rakic to catch Blachowicz with a counter shot and knock him out.

Who do you think will win the light heavyweight main event between Jan Blachowicz and Aleksandar Rakic at UFC Vegas 54?