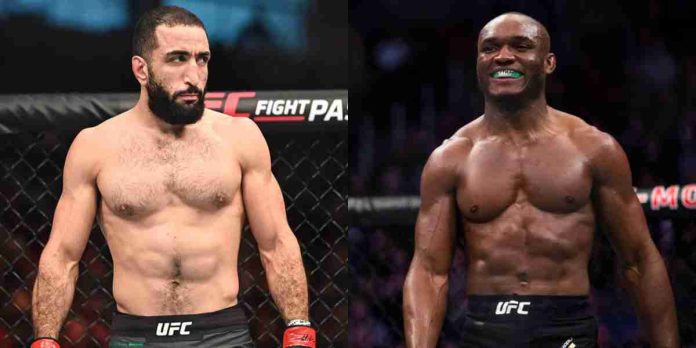 Belal Muhammad has explained why Kamaru Usman doesn’t deserve to be on his welterweight Mount Rushmore.

Usman has defended his title five times, twice against Colby Covington and Jorge Masvidal, and once against Gilbert Burns since winning it by beating Tyron Woodley. Although a wide majority of fans and pros still consider Georges St-Pierre as the division’s GOAT, many believe Usman has surpassed him. Muhammad begs to differ, however.

“My welterweight Mount Rushmore? GSP, obviously; I would put T-Woodley; I would put Matt Hughes; and then I would put maybe BJ Penn, just because he had that one fight, but that’s my [list] right now,” Muhammad said.

When asked about Usman, Muhammad said that the Nigerian won’t get the respect he deserves until he beats him.

“No, he ain’t getting that respect until he beats me,” Muhammad said. “And if you’re looking at it, I tell people, people keep saying he’s one of the best welterweights ever of all time. I’m like, he’s beaten Colby twice, he’s beaten Masvidal twice, he’s beaten Gilbert. Those are just three guys. It’s not like he’s gone through seven or eight different opponents. I mean, I respect him as a champion. He’s staying busy. But you’re fighting rematches before you’re giving other guys a chance to match up against you.”

Muhammad is coming off an impressive unanimous decision victory against Vicente Luque at UFC Vegas 51 and wants to fight Khamzat Chimaev next, whereas Kamaru Usman is expected to put his title on the line against Leon Edwards in the coming months.

Do you agree with Belal Muhammad?