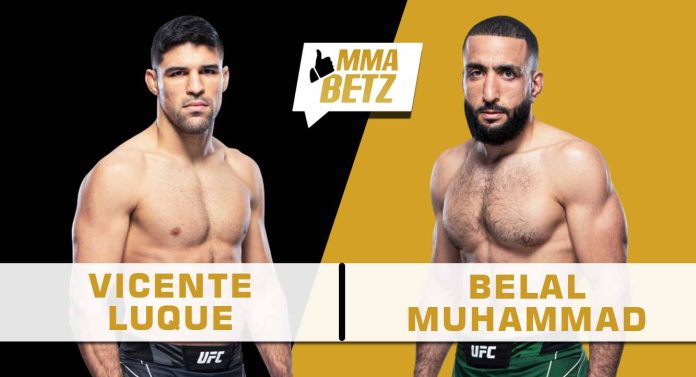 UFC Vegas 51 goes down this weekend at the UFC APEX in Las Vegas. In the main event, welterweights Vicente Luque and Belal Muhammad look to put themselves in a strong position to fight for the title with an impressive win.

In their first fight at UFC 205 in 2016, Muhammad was knocked out in less than two minutes. Although both fighters have grown stronger and wiser since then, the odds are still in favour of the Brazilian because he’s a tough stylistic matchup for the Palestinian-American.

Luque is a very well-rounded fighter. He is primarily a striker with vicious knockout power, but he’s very crafty on the ground as well and is a finisher on top of that. He has won 10 out of his last 11 UFC fights and is regarded as one of the best strikers in the division. Muhammad is primarily a wrestler but combines his wrestling and striking really well to take his opponents away from their strength. He has won six out of his last seven fights, with one no-contest against Leon Edwards at UFC Vegas 21.

With his knockout power, pace, high output, and almost a four-inch reach advantage, ‘The Silent Assassin’ will have the edge on the feet. Statistically, Luque is better offensively as he lands nearly six significant strikes per minute on average compared to Muhammad, who lands four and a half. Muhammad has a better striking defence as he absorbs close to four significant strikes per minute on average, while Luque absorbs close to six.

Muhammad has the edge in wrestling. He’s a very busy wrestler, who lands a little over two takedowns per 15 minutes, although his submission game needs improving. While Luque prefers to keep the fight standing, he is extremely dangerous on the mat, and is coming off back-to-back submission wins against world-class wrestlers in Tyron Woodley and Michael Chiesa. ‘Remember The Name’ will secure takedowns, but controlling Luque on the mat will be his real test, as he will most likely make his way back to his feet one way or another and pressure his opponent looking for a knockout.

Expect Luque to earn another knockout win against Muhammad at UFC Vegas 51.

Who do you think will win the welterweight fight between Vicente Luque and Belal Muhammad at UFC Vegas 51?