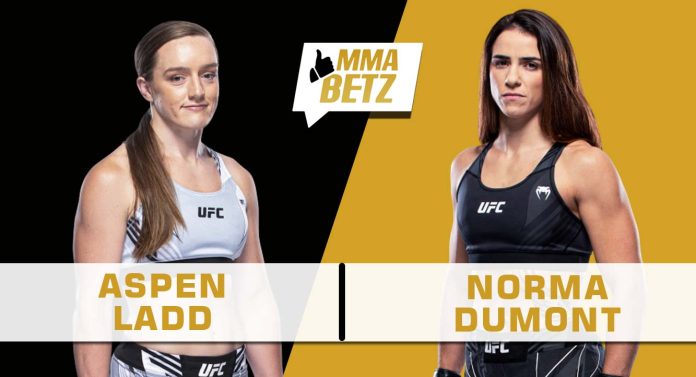 UFC Vegas 40 goes down this weekend at the UFC APEX in Las Vegas. In the main event, Aspen Ladd takes on Norma Dumont in a featherweight bout.

Ladd is giving it a go ten pounds up in order to redeem herself after her most recent weight cut went horribly wrong, forcing her out of her fight against Macy Chiasson at UFC Vegas 38. Dumont was originally scheduled to face Holly Holm, but she had to pull out due to injury.

Ladd vs Dumont is a very interesting fight because both fighters are heavy-handed and well-matched. Ladd is one of the top prospects in the bantamweight division, who comes with a grappling heavy style, but Dumont is extremely well-rounded and will have the edge in the striking department as she’s faster and more powerful.

The American will look to charge at her opponent with reckless abandon, trying to land takedowns, but it could easily backfire if she’s not careful. Dumont has never been taken down in her UFC career, but she has also not faced a wrestler of Ladd’s quality. The Brazilian has a very underrated ground game also. She lands as many takedowns (2.5) as Ladd per 15 minutes, although her accuracy is lower. It’ll be interesting to see who comes out on top in the grappling exchanges.

All in all, it’s a very close fight, but Dumont will use her wrestling to keep the fight standing and get her hand raised on the night.

Who do you think will win the UFC Vegas 40 main event between Aspen Ladd and Norma Dumont?