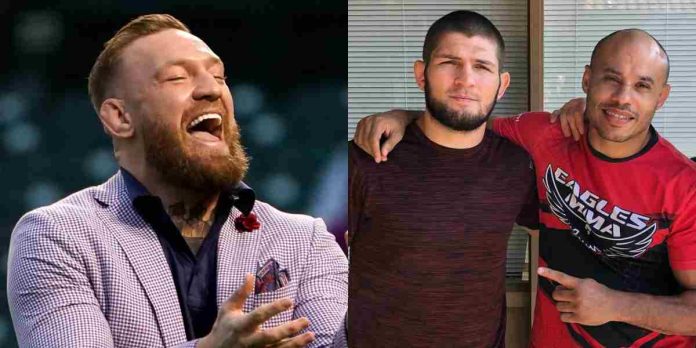 Conor McGregor and Ali Abdelaziz engaged in an intense back and forth Twitter battle on Wednesday, after the Irishman took aim at Khabib Nurmagomedov.

McGregor posted a picture of his arch-rival from the infamous bus incident on the UFC 223 media day at the Barclays Center in Brooklyn. The photo was captioned “Bastrykin! Where is Khabib’s ‘s*** in his pants medal’? He need this for s*** his pants 10 rows back.”

The Dublin native’s tweet comes a day after Khabib threw a subtle jab at him on Instagram, with reference to an incident in Russia, where a man was awarded a medal for defending a girl against three Dagestani men.

Khabib posted McGregor’s photo on his Instagram story with the caption, “Where is my medal from Bastrykin? I was also beaten by Dagestanis in a crowd.”

Abdelaziz was quick to defend Khabib, reminding McGregor of the beatdown he suffered at UFC 229.

“You’re drinking again boy he take your soul but never give it back Punk b*tch,” Abdelaziz wrote.

The former UFC two-division champion then posted a tweet with reference to inbreeding in Dagestan. Abdelaziz warned McGregor of the consequences if the two come face to face.

McGregor responded by saying that he will celebrate when Abdelaziz dies.

The Dominance MMA chief took more jabs at McGregor pertaining to the same tweet, saying that he lacks integrity.

“People of Dagestan some of the best people in the world they are honourable hard worker and have a lotta integrity something you don’t know nothing about,” Abdelaziz wrote in a quote tweet.

McGregor responded by saying, “You mad at google bro?”

The back and forth came to an end after Abdelaziz told McGregor that he wouldn’t respond to his ‘sick ass’ anymore.

“You sick do you think it is funny I’m done responding to your sick ass,” Abdelaziz wrote.

Would you be interested in a potential rematch between Conor McGregor and Khabib Nurmagomedov?