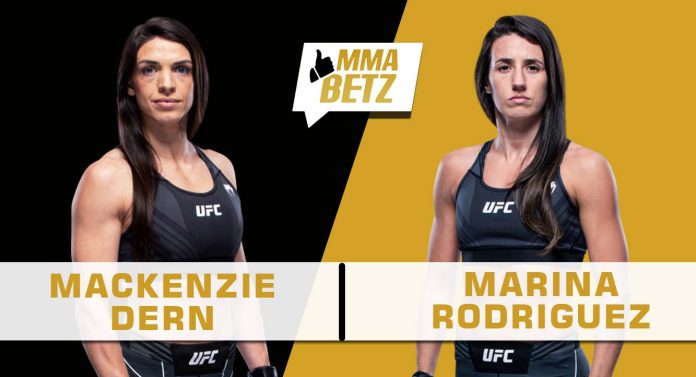 UFC Vegas 39 goes down this weekend at the UFC APEX in Las Vegas. In the main event, top ten strawweights Mackenzie Dern and Marina Rodriguez battle in a potential title eliminator.

Dern is on a four fight win streak, with her most recent win coming against Nina Nunes at UFC Vegas 23, while Rodriguez is coming off back-to-back wins against Amanda Ribas and Michelle Waterson.

Dern vs Rodriguez is a classic grappler vs striker matchup. Rodriguez is one of the most powerful strikers in the strawweight division. She has excellent Muay Thai skills and combines her punches and kicks to great effect. Her speed is also going to cause problems for Dern, who’s the best submission grappler in the division.

Although Dern has made great improvements to her striking game and has looked in fantastic shape in her past few fights, Rodriguez will have the edge as long as the fight stays on the feet as she will look to maximise her reach advantage by fighting at distance.

Dern will surely be looking to take the fight to the mat, where she has a significant edge. Dern doesn’t have great takedown accuracy, but she doesn’t need a lot of takedowns because she’s great at controlling her opponents once she takes them to her world. Rodriguez has a decent takedown defence, but it is penetrable and she will find herself in uncomfortable spots as long as the fight plays out at UFC Vegas 39.

All in all, Dern will do what she does best to get her hand raised on fight night.

Who do you think will win the UFC Vegas 39 main event between Mackenzie Dern and Marina Rodriguez?