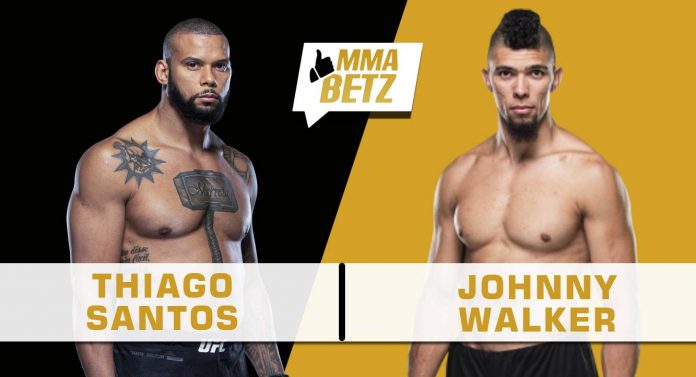 Santos is currently riding a three-fight losing streak, with losses against Jon Jones, Glover Teixeira, and Aleksandar Rakic. Walker would have been on a three fight losing skid also, had he not come from behind to knock Ryan Spann out in his most recent fight at UFC Vegas 11. The two fighters have a chance to make a statement come fight night.

Santos has way more experience, has fought better competition, and is the more technical of the two fighters, but Walker is a wrecking ball who comes out to fight with a ‘kill or be killed’ attitude. He’s got the power to knock anyone out in his division, but his reckless approach leaves him vulnerable to counter shots. His chin is very questionable as well.

‘Marreta’ is a powerhouse as well, with 15 of his 21 career wins coming by way of knockout. However, he has adopted a more calculated approach as of late and will rely on counter striking as Walker charges at him with reckless abandon. Rest assured, this one will not go the distance.

Both fighters are predominantly strikers and don’t rely on grappling a lot. However, Santos has used his grappling in the past when needed and he will find success if he scores takedowns early.

Make no mistake about it, Walker is a steamroller, but Santos will use his experience and composure to catch his compatriot off guard and get the win at UFC Vegas 38.

Who do you think will win the light heavyweight main event between Thiago Santos and Johnny Walker?