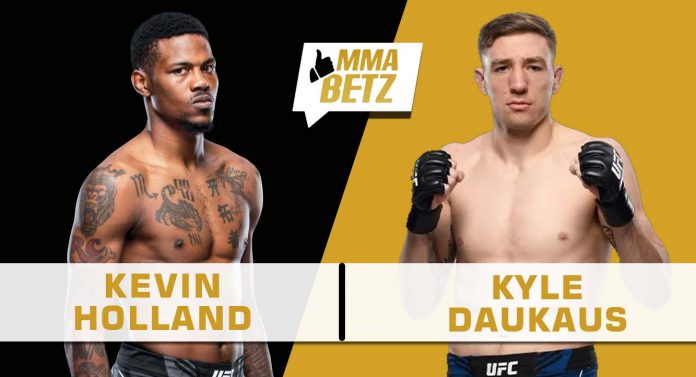 UFC Vegas 38 goes down this weekend at the UFC APEX in Las Vegas. In the co-main event, Kevin Holland looks to bounce back to winning ways against Kyle Daukaus.

Holland is a major step up in competition for Daukaus. ‘Big Mouth’ is better on the feet, as he is faster, more agile and has vicious knockout power in his hands. Daukaus has decent striking as well, but Holland is on a different level compared to him. Holland will try to keep the fight on the feet as that is where he thrives.

With that being said, Holland will be under a significant amount of pressure, because a third consecutive loss could put him in a very tough spot.

Daukaus will prefer to take the fight to the mat, where he feels more comfortable and Holland doesn’t, as seen in his previous two fights, where he was dominated by Brunson and Vettori. Daukaus averages almost two takedowns per fight, although his takedown accuracy isn’t very impressive, and he’s certainly not as good a wrestler as Brunson or Vettori.

Holland has been working very hard on his grappling in the past few months and will be looking to showcase the improvements he has made to his game.

All in all, Holland will keep the fight on the feet and outpoint Daukaus to earn a decision win.

Who do you think will win the middleweight fight between Kevin Holland and Kyle Daukaus at UFC Vegas 38?