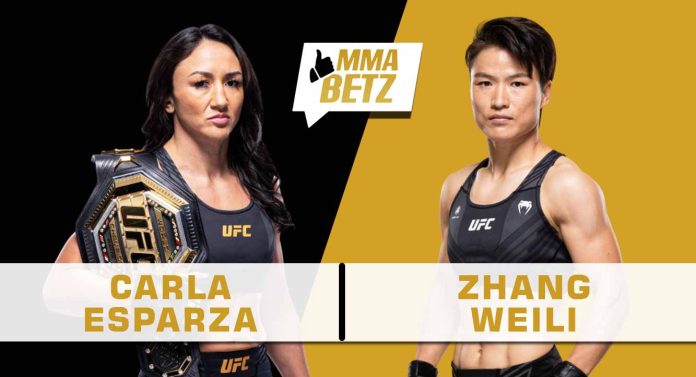 Esparza is currently riding a six fight winning streak, with her most recent win coming against Rose Namajunas in their strawweight title fight, whereas Zhang is coming off a second round highlight reel knockout victory over Joanna Jedrzejczyk.

Esparza is the best wrestler in the division. She loves to take her opponents down and grind out wins. Zhang is a powerful striker with an excellent ground game as well. She is extremely explosive and has immense power in her hands. Zhang will have the edge if the fight stays on the feet because of her volume, speed, pressure and power. Esparza has been outclassed on the feet by superior strikers, but she makes her fights competitive thanks to her wrestling and control. Zhang will be tough to take down however as she has good defensive wrestling, and is very explosive.

Statistically, Zhang has the edge as far as offensive striking is concerned as she lands close to six significant strikes per minute on average whereas Esparza lands less than three. Esparza absorbs less than three significant strikes per minute on average, whereas Zhang absorbs close to five. Esparza has better grappling stats, with over three takedowns per 15 minutes, and a decent takedown accuracy, defence and submission average. Zhang lands a little over two takedowns per 15 minutes, with almost the same accuracy as her opponent. She has a better takedown defence however.

If Esparza can take Zhang’s shots, she will drag out rounds with her wrestling and keep the fight interesting. The Chinese sensation however has more tools and is better rounded than the champ and should get her hand raised on the night.

Who do you think will win the strawweight title fight between Carla Esparza and Zhang Weili?