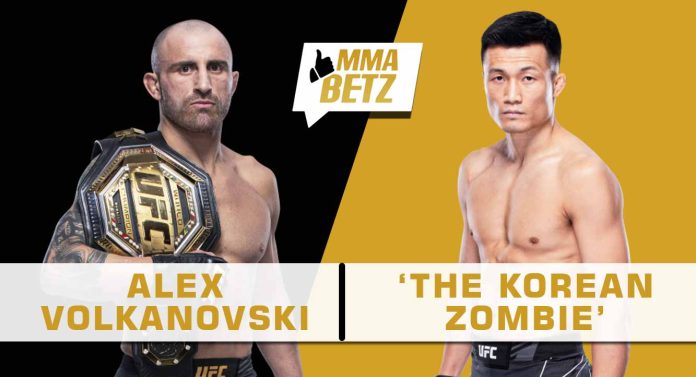 UFC 273 goes down this weekend at VyStar Veterans Memorial Arena in Jacksonville, Florida. In the main event, featherweight champion Alex Volkanovski defends his title against ‘The Korean Zombie’.

Max Holloway was originally booked to challenge Volkanovski in their trilogy at UFC 272, but after his withdrawal due to injury, the UFC booked champion against ‘The Korean Zombie’ at UFC 273. On paper, Chan Sung Jung has a puncher’s chance, but it’s still enough to keep the Aussie’s fans on the edge of the seats for this one.

Volkanovski is a massive favourite and for good reason. He hasn’t lost since 2013, winning 21 straight fights with ten in the UFC. He’s a very well rounded fighter with powerful kickboxing, high-level wrestling and ferocious ground and pound. He most recently defended his title against Brian Ortega at UFC 266. ‘The Korean Zombie’ is also a very well-rounded fighter, who is 4-2 since making his comeback after a three-year hiatus due to mandatory military service.

At +500, oddsmakers aren’t giving ‘The Korean Zombie’ much of a chance, and it’s understandable as Volkanovski does everything better. Jung has brilliant boxing ability, but was pieced up by Brian Ortega, who had no answers to Volkanovski’s striking. TKZ is a very good grappler as well, and he showed his diverse skillset in his most recent win against Dan Ige, but it’s nothing Volkanovski hasn’t seen before.

‘The Korean Zombie’ earned his nickname from his incredible ability to keep coming forward and attacking his opponents, and he should approach his fight against Volkanovski the same way. With his work cut out, pressuring the champion and forcing him to make mistakes will work better for the UFC veteran. It’s risky, but it’s a risk worth taking. ‘The Korean Zombie’ has been training with Henry Cejudo, who helped Zhang Weili and Deiveson Figueiredo make massive improvements. Judging by Cejudo’s performance as a coach, expect Jung to put up a great fight and have a few new tricks up his sleeve.

Expect Volkanovski to win by decision, although the fight will be a lot more competitive than the odds suggest.

Who do you think will win the featherweight fight between Alex Volkanovski and ‘The Korean Zombie’?