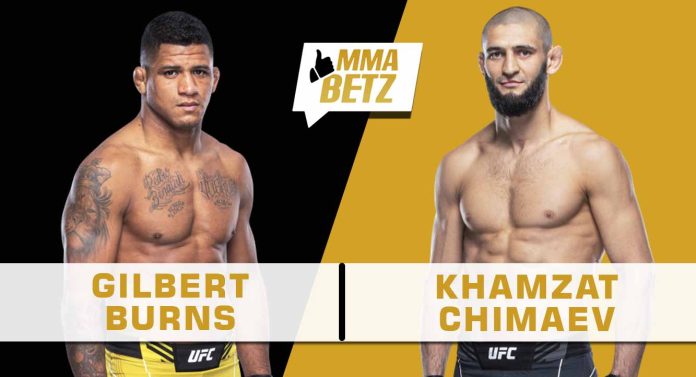 Burns is coming off a unanimous decision victory over Stephen Thompson at UFC 264, while Chimaev is 4-0 in the UFC, with his most recent win coming against Li Jingliang by first round submission at UFC 267.

All eyes will be on Burns and Chimaev when they face each other at UFC 273 in what many believe is the people’s main event. Burns is one of the best welterweights in the world. His striking is solid but his strong point is his world class grappling. Chimaev is an extremely well-rounded fighter as well. He’s a very solid striker, with one-punch knockout power and world class wrestling.

The Chechen-Swede will have a four inch reach and significant size and power advantage come UFC 273. Burns is more battle-tested, however, and his experience will come into play. Chimaev won’t show ‘Durinho’ any respect whatsoever, and that’s where things will get interesting. Make no mistake about it, Burns has dynamite in his hands and can knock anyone out, but he will struggle against Chimaev’s power, speed, and length.

In the grappling department, things will be a lot more interesting. Chimaev won’t shy away from attempting takedowns, and Burns won’t mind a grappling contest because he’s one of the best submission artists in the UFC. Khamzat’s aggressive wrestling style will leave him vulnerable to Burns’ submission attempts. The former title challenger will also be a hard man to control on the mat, but if Chimaev’s able to do that, he will leave no doubt whatsoever that he belongs among the elite of the division.

Given the aggressive nature of both fighters, this one will likely not go the distance. Expect Chimaev to come out all guns blazing, put Burns on the back foot and earn a knockout victory.

Who do you think will win the welterweight title eliminator between Gilbert Burns and Khamzat Chimaev at UFC 273?