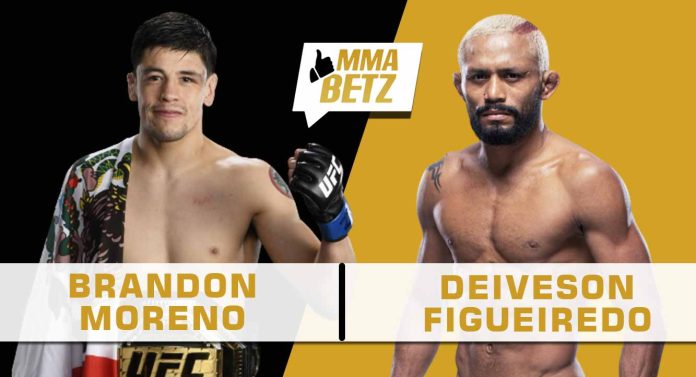 UFC 270 goes down on Saturday night at the Honda Center in Anaheim, California. In the co-main event, Brandon Moreno defends his flyweight title against Deiveson Figueiredo in their trilogy.

Moreno and Figueiredo have fought twice. Their first fight at UFC 256 was highly competitive, with both fighting to a majority draw. In their second fight at UFC 263, Moreno steamrolled Figueiredo to earn a third round submission win to become the first Mexican-born fighter to get his hands on a UFC title. ‘The Assassin Baby’ was far more active in his striking and was levels above his opponent in the grappling department in the rematch.

There’s every reason to believe that Moreno will steamroll Figueiredo again at UFC 270. Although the Brazilian cited a brutal weight cut as his reason for not performing up to the mark last time, Moreno was the better fighter by a big margin on the night and showcased great improvements to his overall game. The momentum is certainly on the champ’s side, and he should be stepping inside the Octagon at UFC 270 with a lot of confidence. The same can’t be said about Figueiredo.

Figueiredo’s power is his biggest weapon, but we have seen Moreno eat his best shots without much trouble. While ‘Deus Da Guerra’ is very fast and explosive as well, he struggled against Moreno’s pressure and speed in their last two fights. Considering the improvements Moreno has made to his game, beating him will be a very tough ask for Figueiredo, but not an impossible one. He should be looking to start fast and not let Moreno settle down and take over.

It’s understandable that Figueiredo will want to preserve energy and fight smart for a five-round war, but playing to his strengths and attacking the champion early, looking for the knockout, will be his key to victory.

Statistically, the two are very even. Both fighters land and absorb close to three and a half significant strikes per minute. In the grappling department, Moreno has a edge because of his wrestling, but Figueiredo is very busy on the mat as well and is always looking for submissions. Moreno has better cardio, so he will once again look to start well and put Figueiredo on his back foot right from the word go.

All in all, Moreno will come out all guns blazing to earn another submission win at UFC 270.

Who do you think will win the flyweight title fight between Brandon Moreno and Deiveson Figueiredo at UFC 270?