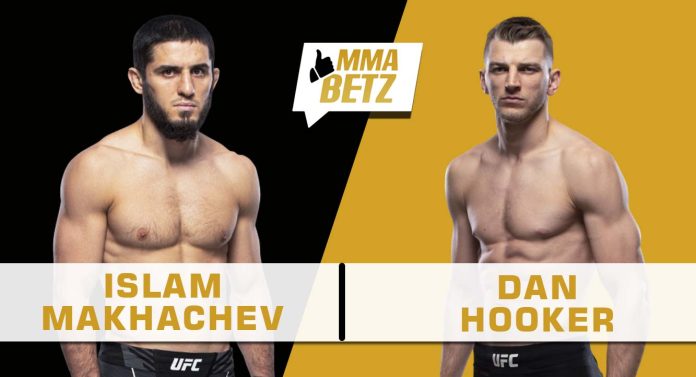 UFC 267 goes down this weekend at the Etihad Arena on Yas Island, Abu Dhabi as lightweights Islam Makhachev and Dan Hooker lock horns in a crucial top 10 lightweight contest.

Makhachev is one of the most hyped contenders in the UFC’s stacked lightweight division, and is currently riding an eight-fight winning streak, with his most recent win coming against Thiago Moises at UFC Vegas 31. Hooker recently snapped his two fight losing skid by beating Nasrat Haqparasat at UFC 266, and is looking to improve to two wins in a row this weekend.

Rafael dos Anjos was originally scheduled to face Makhachev at UFC 267, but had to pull out due to a knee injury.

Makhachev is a -700 favourite, thanks to his world class grappling prowess, but Hooker is one of the most heavy handed strikers in the division, which makes the fight between the two very interesting. The Kiwi has some of the best technical kickboxing in the division and sets up his combinations very well. Makhachev isn’t as polished as Hooker, but he’s still a very good striker.

In the grappling department, Makhachev has a very significant edge. The Sambo world champion is a very busy grappler, as he lands more than three takedowns and attempts 1 submission per fight. Hooker has a solid takedown defence, but it’ll be interesting to see how his defensive wrestling holds up against a wrestler as decorated as Makhachev.

All in all, Makhachev will use his wrestling and pressure to take the fight into his world and earn a unanimous decision win.

Who do you think will win the lightweight fight between Islam Makhachev and Dan Hooker at UFC 267?