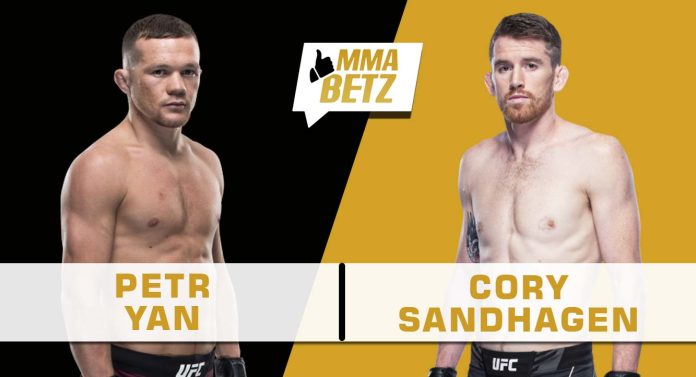 UFC 267 goes down this weekend at the Etihad Arena on Yas Island, Abu Dhabi. In the co-main event, Petr Yan takes on Cory Sandhagen for the interim bantamweight title.

Yan was originally scheduled to run it back with Aljamain Sterling, after their UFC 259 fight ended in a controversial manner, but the reigning champion had to withdraw due to injury.

Yan vs Sandhagen is going to be fireworks, as both fighters have exceptional striking abilities. Sandhagen has speed and reach advantage, and can throw a variety of strikes from different angles. He likes to target the body as well. Yan is a calculated striker, who grows stronger as the fight progresses and breaks people with constant pressure. He’s also very heavy handed.

We shouldn’t expect a lot of grappling action in this fight, as both fighters prefer to keep the fight on the feet, but Yan has the edge in that department nonetheless. The Russian has a very underrated wrestling game.

Yan deserves to be the favourite, given his recent form, but it will be a very close fight with a lot of action. All in all, ‘No Mercy’ will use his pressure and accurate striking to outpoint Sandhagen and get his hands on the interim title.

Who do you think will win the UFC interim bantamweight title fight between Petr Yan and Cory Sandhagen at UFC 267?