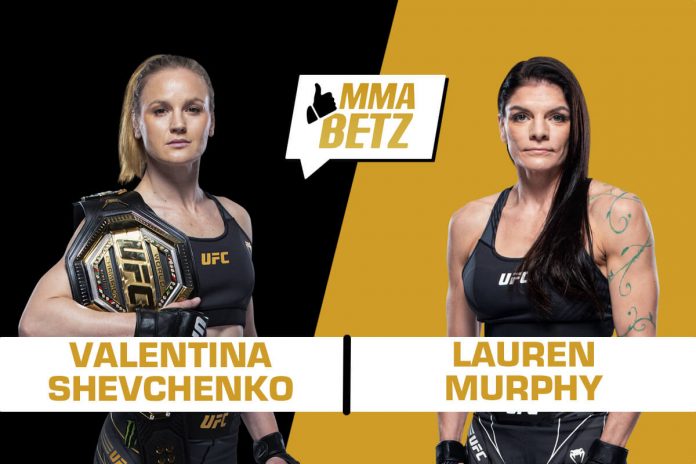 UFC 266 goes down this weekend at the T-Mobile Arena in Las Vegas. In the co-main event, Valentina Shevchenko defends her flyweight title against Lauren Murphy.

Shevchenko hasn’t looked back since winning the flyweight title at UFC 231, where she dominated Joanna Jedrzejczyk to bag a unanimous decision win. Since then, she has defended her title five times in a dominant fashion against Jessica Eye, Liz Carmouche, Katlyn Chookagian, Jennifer Maia, and Jessica Andrade. Murphy is on an impressive five-fight win streak, with a big win over Joanne Calderwood in her most recent fight at UFC 263.

Murphy’s chances of beating Shevchenko are very thin on paper because the champion is levels ahead of her in every department. ‘Lucky’ has decent striking, but ‘Bullet’ is on a different level altogether. She’s arguably one of the top five strikers in the UFC right now.

Shevchenko’s speed, accuracy and cat-like reflexes are going to give Murphy, who is a lot slower and sloppier in comparison, a lot of problems on the feet. Statistically, Shevchenko has the edge, although she isn’t a high volume striker. The champion lands 3.1 significant strikes per minute on average but absorbs only 2. Murphy lands nearly 4 significant strikes per minute, but her accuracy is lower and she absorbs twice as many strikes as Shevchenko.

Murphy is more comfortable on the mat, but she will have to take Shevchenko down to do any sort of damage. Taking Shevchenko down and keeping her there will be a massive challenge for Murphy, because the Kyrgyzstani is an elite grappler and she will surely look to turn the tables on the American if the fight goes to the mat.

All in all, Shevchenko will use her superior striking to outstrike Murphy on the feet and bag a lopsided unanimous decision win.

Who do you think will win the flyweight title fight between Valentina Shevchenko and Lauren Murphy in the UFC 266 co-main event?