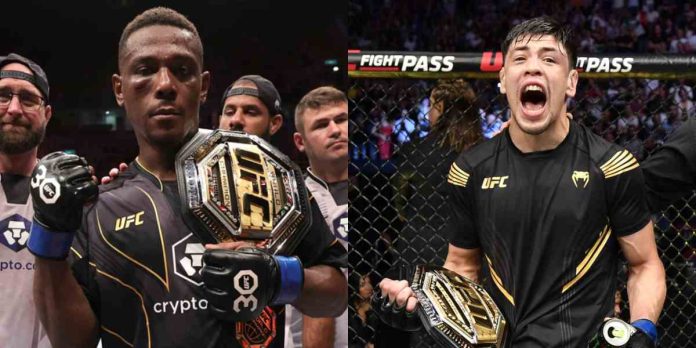 Jamahal Hill has made his dreams come true. He is now the UFC light heavyweight champion.

Not only did Hill manage to defeat Glover Teixeira at UFC 283, but he also did it in a dominant fashion. The American had a solid opening round, where he landed jabs and powerful combinations to put his opponent off his game, before hurting him in the second round. ‘Sweet Dreams’ was the aggressor in the third, fourth and fifth rounds as well, and managed to win by scores of 50-44, 50-44, and 50-44.

Hill showcased massive improvements to his game at UFC 283, but things are going to get tougher moving forward. So, what’s next for the newly crowned light heavyweight champion?

Jamahal Hill will likely make his first title defence against Jiri Prochazka, the division’s uncrowned champ who vacated his belt due to injury.

‘Denisa’ is expected to make his return to the Octagon this summer. The former champ took to Twitter minutes after Hill’s win to congratulate him, before reminding him that he’s coming.

Fans are already excited about a fight between the two, and rightly so. It’s an excellent stylistic matchup between two powerful strikers. It’ll be exciting to see how Hill’s calculated striking matches up with Prochazka’s unorthodox fighting style.

In case Prochazka requires more time to recover, Magomed Ankalaev would be a great test for Hill. Many believe he deserved to win the title at UFC 282, where he fought Jan Blachowicz to a split draw.

The Dagestani is a very well-rounded fighter who combines technical striking with excellent wrestling. Hill showed improvements to his ground game against Teixeira, and should he fight Ankalaev next, his takedown defence will come in handy.

Brandon Moreno put an end to his rivalry with Deiveson Figueiredo in style, winning by a doctor’s stoppage to become the undisputed flyweight champion.

Sitting at 1-1-1 in their previous three fights, Moreno and Figueiredo threw down for the fourth time with the undisputed flyweight title and bragging rights at stake. Both men fought their hearts out during the first two rounds, which were highly competitive. Round two featured a number of scrambles which were fascinating to watch.

In the third round, Moreno struck Figueiredo with a crushing combo, damaging his right eye. The Brazilian managed to survive the round, but the fight was called to a stop after a doctor deemed ‘Daico’ unable to continue. ‘The Assassin Baby’ was awarded the TKO win as a result.

In his post-fight Octagon interview, Figueiredo announced that he will be moving up to bantamweight, which means we won’t see a fifth fight between the two. It isn’t needed anyway given the conclusive ending to their rivalry. Moreno should now focus on other contenders, including some up-and-coming names.

At the moment, there’s only one flyweight deserving of a title shot and that’s Alexandre Pantoja, who is currently riding a three-fight winning streak with his most recent win coming against Alex Perez by first-round submission at UFC 277.

Pantoja also served as the backup at UFC 283, and had a run-in with Moreno backstage, where he demanded a title fight.

‘The Cannibal’s’ excitement is reasonable. He has already beaten Moreno twice, in TUF and the UFC, so he believes he can do it a third time to become the champion. The Mexican phenom has come leaps and bounds since they last fought, however. In any case, it would be an exciting fight.

Who do you think Jamahal Hill and Brandon Moreno should fight next?