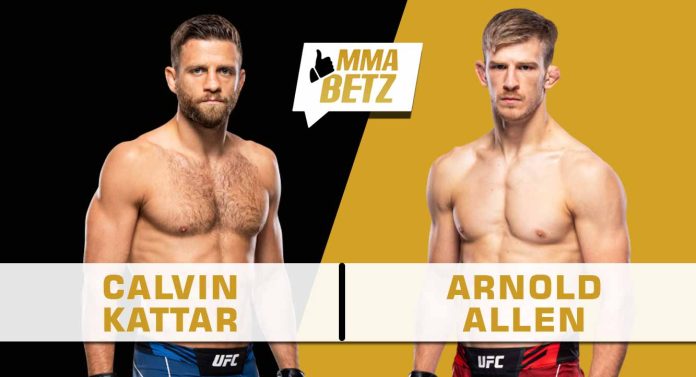 UFC Vegas 63 goes down this weekend at the UFC APEX in Las Vegas. In the main event, Arnold Allen faces his toughest test at featherweight, in Calvin Kattar.

Kattar is coming off a controversial split decision loss to Josh Emmett at UFC Austin. Whereas Allen is currently riding a nine-fight winning streak in the UFC, with his most recent win coming against Dan Hooker at UFC London.

Kattar has a background in wrestling, but likes to keep his fights standing, making good use of his crisp boxing and vicious elbows. The American has quite a bit of venom in his shots. Four of his last six wins have come by way of KO/TKO. Allen is very well-rounded also as he combines technical kickboxing with excellent wrestling and forward pressure. Kattar is a high-volume striker, who gets better as the fight progresses. A longer fight will favour him as Allen has never gone past the third round in the UFC, and he tends to slow down after the first couple of rounds.

Allen will come out strong and push the pace early on, and will use his speed and movement to make things difficult for Kattar. ‘Almighty’ will mix things up and find success in the early rounds, but once Kattar finds his range and rhythm, he could take over. Allen’s wrestling will be key in this matchup, but he’ll have to be at his best to take down Kattar, who has an exceptional takedown defence.

All in all, it will be an extremely close contest but expect Kattar to use his experience to his advantage.

Who do you think will win the featherweight main event between Calvin Kattar and Arnold Allen at UFC Vegas 63?