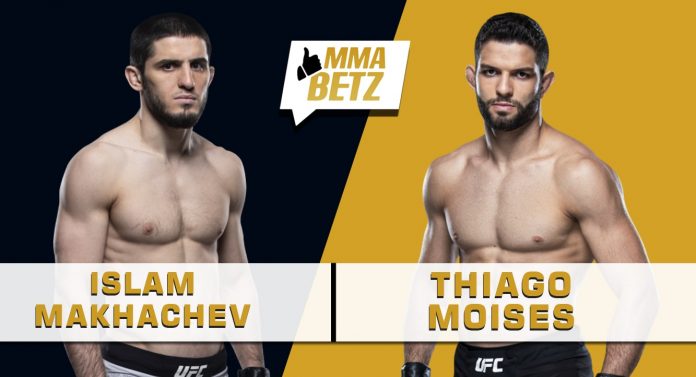 UFC Vegas 31 goes down this weekend at the UFC APEX in Las Vegas. In the main event, highly-touted lightweight contender Islam Makhachev takes on a tricky challenge in Thiago Moises.

Makhachev is currently riding a seven-fight win streak, with his most recent victory coming against Drew Dober by third-round submission at UFC 259 in March. Moises is on a three-fight winning run, with impressive victories over Michael Johnson, Bobby Green and Alexander Hernandez.

With Khabib Nurmagomedov retired, Makhachev is currently Dagestan and American Kickboxing Academy’s best shot at a world title, and he has a lot to live up to. But with top ten lightweights not showing much willingness to fight him, he has been forced to accept high-risk, low-reward fights.

Moises is a +450 underdog, and has more to gain than Makhachev from the fight. That being said, the fight is still very important for Makhachev, as he can earn himself a big fight with a clinical performance at UFC Vegas 31.

The Brazilian is a very well-rounded fighter, who has great striking and BJJ skills, but Makhachev brings a world-class Sambo skillset to the table, and is also a very underrated striker.

On the feet, both fighters are very conservative and don’t throw a lot of strikes. Makhachev lands just 2 significant strikes per minute on average, compared to Moises, who lands 2.5. Defensively, the AKA representative is extremely efficient as he absorbs less than 1 significant strike per minute on average, while the Sao Paulo native absorbs more than 3.

Although Makhachev has the edge in the stand-up, he will still like to take the fight to the mat, where he’s at his most comfortable. But make no mistake about it, Moises is an excellent grappler in his own right.

Makhachev averages 3.5 takedowns per 15 minutes, while Moises averages 2. Moises doesn’t have an overly impressive takedown defence, so we should expect the Russian to take him down with ease. The BJJ black belt attempts 2.5 submissions per 15 minutes.

All in all, it’s a great fight between two of the most exciting prospects in the UFC lightweight division, but Makhachev will use his wrestling and pressure to neutralise Moises’ submission threat and churn out a submission victory.

Who do you think wins the top 15 lightweight matchup between Islam Makhachev and Thiago Moises at UFC Vegas 31?