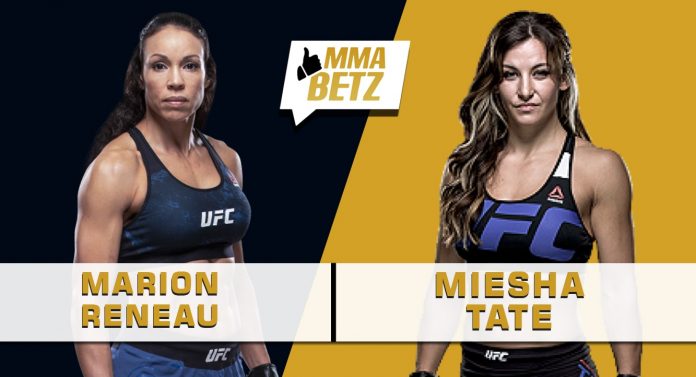 UFC Vegas 31 goes down this weekend at the UFC APEX in Las Vegas. In the co-main event, Marion Reneau welcomes former bantamweight champion Miesha Tate back in the Octagon.

Reneau is on a four-fight losing streak and has already announced that her fight with Tate will be her last. ‘Cupcake’ is returning to action nearly five years after announcing her retirement following her loss to Raquel Pennington at UFC 205 in 2016.

While ring rust is a major talking point ahead of this fight, Tate believes her time away from fighting has helped her body heal from years of wear and tear, and she’s ready to go again, with her eye on a rematch with current two division champion, Amanda Nunes.

Reneau is a tough comeback fight for Tate, despite the fact that she’s lost four in a row and is past her prime. She’s tough as nails and has never been finished in her career, so the former champ will have to pull off something special to do so.

Considering it is the final fight of her career, Reneau will be looking to end her career on a high, which makes her an extremely dangerous opponent for Tate.

Reneau has a slight edge on the feet as she’s more active and powerful than Tate. ‘The Belizean Bruiser’ lands 3.4 significant strikes per minute, compared to Tate, who lands 2.2.

Defensively, Reneau also has the slightly better numbers as she absorbs 3.8 significant strikes per minute, while Tate absorbs 4.4. If the 44 year old Californian is able to keep the fight standing, she has a major chance of out-pointing the former champion, and getting her hand raised on the night.

The momentum shifts in Tate’s favour, however, when it comes to grappling. While Reneau is no slouch on the mat, the former ONE Championship Vice President is an extremely aggressive grappler, who’s always looking for the finish. She averages 1.2 takedowns per 15 minutes, over twice as many as her opponent.

Although Tate’s takedown success rate is only 22 percent, she makes it very hard for her opponents to get up once she has them down. Reneau has a solid takedown defence of 71 percent. She’s also a BJJ black belt, with an excellent submission game. It will be an intriguing fight if it goes to the mat.

All in all, it will be a very close fight, with Reneau churning out a decision victory.

Who do you think wins the bantamweight co-main event between Marion Reneau and Miesha Tate at UFC Vegas 31?