After spending 20 months away from the Octagon, since his last fight against Neil Magny, welterweight contender Santiago Ponzinibbio has finally recovered from a series of infections and wants to get his UFC career back on track.

Speaking to MMA Junkie, Ponzinibbio gave details about his medical condition and the difficult recovery he’s had to face.

“I have a lot of medical problems,” Ponzinibbio said. “It started with a blood infection inside my body. The infection got to my blood, and I had two different kinds of bacteria. One is an epidemic staph and the other bacteria is pseudomonas. It’s a very dangerous bacteria. I stayed in the hospital [and] I started with a lot of swelling in my body in some parts, more in the knee. I stayed there for eight days. I started treatment and they put a peripherally inserted central catheter line in my arm and a lot of medication.”

As well as being prescribed a lot of medication, the Argentinian then had to attend physical therapy at the UFC Performance Institute in Las Vegas, to help with his recovery.

“It’s crazy. The first time [when] I had five different medications per day [and] nurses in my home, I couldn’t do nothing,” Ponzinibbio said. “[It was] very, very bad and I stayed maybe three months with the PICC line medication. After that, I continued to be alright with a couple of medications and the doctor said, ‘OK, you’re good. You can start your physical therapy for your muscles to get back to normal, ‘and I started to train and I went to Vegas.”

Although Ponzinibbio had got a clearance from the doctors to train in Vegas, it wasn’t the end of his struggles as ‘Gente Boa’ was also discovered that he was suffering from a career-threatening bone infection.

“I had a lot of pain, a lot of swelling in my body,” Ponzinibbio said. “I couldn’t walk. The day I didn’t take the anti-inflammatory, I couldn’t go to the room, I couldn’t go up the stairs. It was crazy.

“A couple of doctors saw the MRI and they said, ‘Listen, you have a bone infection. It’s very, very dangerous. Maybe you can’t fight again in your career.”

Having won seven consecutive fights in the division, the Ponzinibbio was scheduled return against Robbie Lawler at UFC 245, but the 33 year old had to withdraw from the fight due to the infections.

Although the road to recovery for Ponzinibbio has been long, he revealed that he is “back to normal” now and looking forward to making his way up to a title shot again.

“Now my body’s back to normal,” Ponzinibbio said. “I needed to do a lot of work after this. All these months, for sure my body felt that. A lot of condition training, PT and back, little-by-little, to training. But this is the reason why I stayed far from the Octagon for a year and a half.

“It’s very tough for me. Always looking at the division, the moves, everything. Before everything happened, they told me, ‘One more fight and you go for the belt.’ This is my dream, I’ve been working so hard [for] a lot of years. I’m so excited and, a couple of years after, I’m fighting for my life in the hospital. Ups and downs, [a] very crazy time.”

Who would you like to see Santiago Ponzinibbio face in his return to the Octagon? 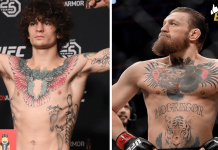