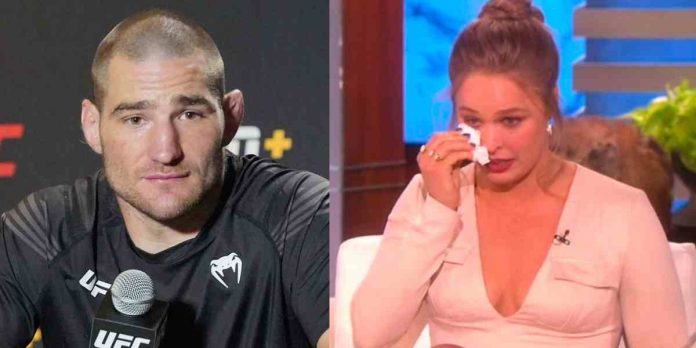 Rousey was a force to be reckoned with during her heyday, but her upset loss to Holly Holm in her bantamweight title defence at UFC 193 in 2015 put her career to a temporary standstill, before Amanda Nunes ended her legendary MMA run with a brutal first round beatdown in December 2016. ‘Rowdy’ entered the Octagon against ‘The Preacher’s Daughter’ with an undefeated 12-0 record.

Having never tasted defeat before in MMA, Rousey found it extremely difficult to deal with her loss to Holm. So much so that she started having suicidal thoughts, she revealed during an appearance on ‘The Ellen Show’ back in early 2016. In an Instagram post, Strickland explained why he hates the UFC Hall of Famer for having said so.

“I explained why I hate Ronda Rousey, why I find she is everything that’s wrong with the f***ing world,” Strickland said. “[Her Ellen appearance] was on the news, it was f***ing everywhere. I don’t know when suicide became cool but it became cool, like they made a Netflix show ‘13 Reasons.’ Everybody’s f***ing depressed, everybody is suicidal, and let me f***ing tell you guys, it is not f***ing cool. Depression is like cancer, it’s f***ing terminal. It’s like herpes, you might not have it but you always f***ing have it and it’s waiting to f***ing come out.

Sean Strickland is coming off a first round KO loss at the hands of Alex Pereira at UFC 276. He will make his return to the Octagon against Jared Cannonier in December.

What do you make of Sean Strickland’s comments?