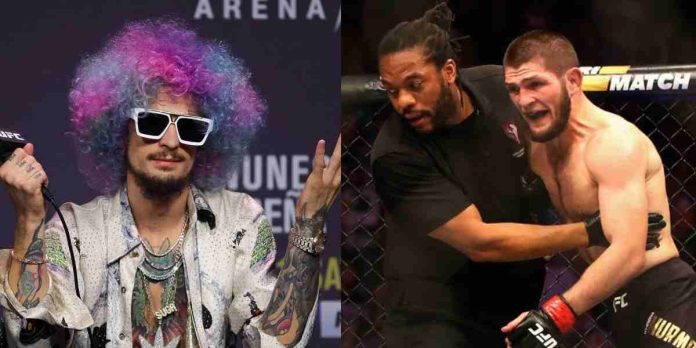 Khabib retired from the sport after making his third successful lightweight title defence by beating Justin Gaethje at UFC 254, citing the passing of his father, who had been by his side throughout his professional career, as his reason. A vacant title fight featuring Oliveira and Michael Chandler was then announced, which the Brazilian won at UFC 262.

Oliveira made a successful title defence against Dustin Poirier at UFC 269, before losing his belt after missing weight for his title fight against Gaethje at UFC 274, where he won by first round submission. Although Khabib wants ‘Do Bronx’ to fight his longtime friend Islam Makhachev next, many want to see ‘The Eagle’ return for a fight against the current best lightweight in the world.

Sean O’Malley On Oliveira and Khabib

In an interview with Canal Encarda (as transcribed by MMA Fighting), O’Malley said that he’d love to see a fight between Oliveira and Khabib, before claiming that maybe the Brazilian was the reason for Khabib’s retirement.

“That’s the one interesting fight that I would like to see if Khabib came back in the division,” O’Malley said. “It would be Charles. Everyone else I think Khabib kind of mauls. I think Charles is the only one that can really give Khabib problems and, who knows, maybe that’s why Khabib stepped away. Maybe he saw, ‘I don’t want that guy.’ Who knows, but yeah, that’s one fight that I would be interested in seeing Khabib come back for. It would be a massive fight.”

Sean O’Malley is currently riding a three fight winning streak and is scheduled to face Pedro Munhoz next month at UFC 276.

Who do you think would win a potential fight between Charles Oliveira and Khabib Nurmagomedov?