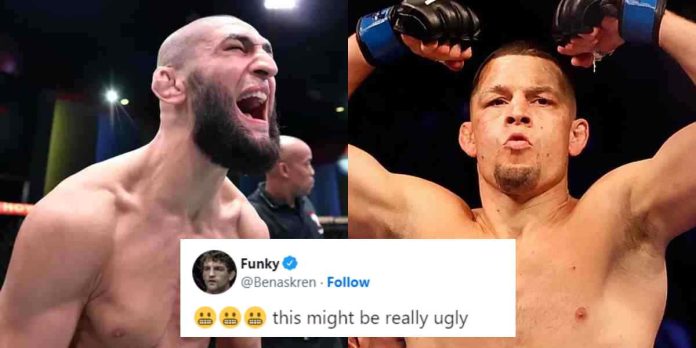 Nate Diaz and Khamzat Chimaev have verbally agreed to fight in the UFC 279 main event in September, and the MMA community is divided over the matchup.

Diaz only has one fight left on his contract and wants to fight it out to explore bigger opportunities, such as a boxing fight against Jake Paul. The Stockton native has won only one fight in the last six years, a unanimous decision win over Anthony Pettis at UFC 241 in August 2019, and is currently on a two fight losing skid, with his most recent loss coming at the hands of Leon Edwards at UFC 263.

Chimaev, on the other hand, is 5-0 in the UFC, with his most recent win coming against Gilbert Burns in a three round war at UFC 273. Many fans and pros have slammed the UFC for booking Diaz against ‘Borz’ as they believe the latter is a terrible matchup for the MMA legend.

According to Diaz’s representative Zach Rosenfield however, his client asked for Chimaev himself.

Chimaev has opened as a -1100 favourite against Diaz, but despite what the odds suggest, Paul is rooting for the former UFC lightweight title challenger to pull off one of the biggest upsets in history.

Belal Muhammad is also backing Diaz, and Leon Edwards – who is scheduled to face Kamaru Usman for the welterweight title at UFC 278 – to ruin the UFC’s plan of a title fight between Chimaev and ‘The Nigerian Nightmare’.

BJ Penn believes Diaz is a legend for accepting the Chimaev fight.

Darren Till is very excited about the matchup.

Gilbert Burns said that he will be ready just in case…

Ben Askren isn’t giving Diaz much of a chance it seems.

Phillip Rowe had an interesting say on the matchup.

Who do you think would win a potential fight between Nate Diaz and Khamzat Chimaev?