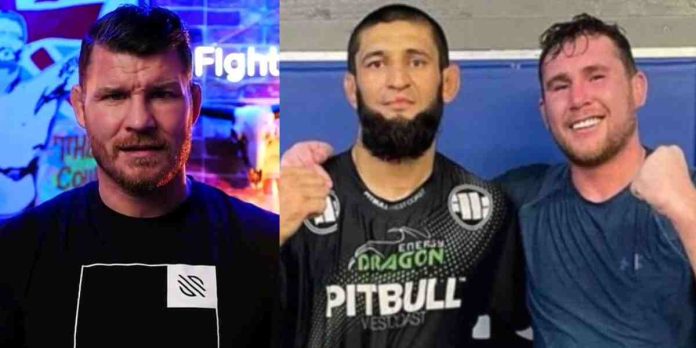 Michael Bisping has revealed that he’s hearing ‘truly terrifying’ things about Khamzat Chimaev from people accompanying Darren Till, who’s currently training alongside ‘Borz’ at the All Stars Gym in Sweden.

Chimaev is gunning for a fight after smashing Li Jingliang in his most recent outing at UFC 267, while Till is hoping to make a comeback this summer after tearing his ACL weeks before his scheduled UFC Vegas 36 bout against Derek Brunson, which he lost by third round submission.

A few days after Till’s loss against Brunson, Chimaev said that he felt sorry for the Brit and invited him to fly to Sweden to train with him.

“I like this guy (Till), actually,” Chimaev said in an interview. “He’s funny. A funny guy. I feel sorry for him about last fight, he lose. He lose many fights last time. I think he’s good, but has to train harder. If he wants to come to Sweden, he’s welcome. I told him, I can help you with your wrestling or something. And we can spar, we can train.”

Till didn’t let the opportunity pass and is currently training with Chimaev, although he is having to work really hard to keep up with his new training partner.

Speaking on his YouTube channel, Bisping said that he’s hearing some ‘truly terrifying’ things about Chimaev from people accompanying Till.

“I am hearing things about Khamzat that are truly terrifying,” Bisping said. “As I said, Darren Till is out there. I’ve got a bunch of friends out there in Sweden. They’re filming. Blockasset is a company I’m involved with. They’re calling me up and saying, ‘Holy f*** s***! Khamzat is the real deal! Works his ass off, trains like a motherf***er, lifting weights, pushing everybody in the room. Great stand-up, great wrestling’.”

Who do you think Darren Till should fight next?