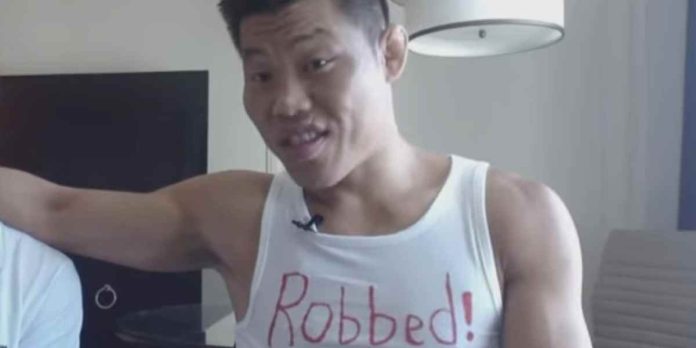 Li Jingliang believes he was robbed at UFC 279, where he lost his 180-pound catchweight bout against Daniel Rodriguez by split decision.

Jingliang’s trip to Las Vegas was one to forget. He was initially booked to fight Tony Ferguson in the co-main event and even had a nice custom suit made for himself which he planned to wear at the press conference, but couldn’t show it off as the press conference was called off after Khamzat Chimaev, Kevin Holland and Nate Diaz got into a scuffle backstage.

‘The Leech’ had to face a new opponent in Rodriguez after Chimaev’s weight-cutting troubles forced the UFC to make three last minute changes. Jingliang’s week went from bad to worse when he lost a controversial split decision to ‘D-Rod’. Even Dana White said the Chinese star deserved to win.

During an appearance on MMA Fighting’s The MMA Hour, Jingliang protested against the judges’ decision by wearing an undershirt emblazoned with ‘Robbed!’.

“It’s a robbery,” Jingliang told Ariel Helwani through his translator. “Last Saturday was an awful Saturday to me. Awful. All the athletes, all the fighters on this card prepared for these fights very seriously, but [there was] a lot of chaos during the last week. I think it’s a terrible situation. I made weight. Tony made weight. Why don’t [they] let us fight? It’s not our fault. So why? Tony fought Nate as the main event — why don’t they let me fight Nate? It’s unfair. I cannot accept that. The only option I have at that time [was Rodriguez].

Do you agree with Li Jingliang that he was robbed?