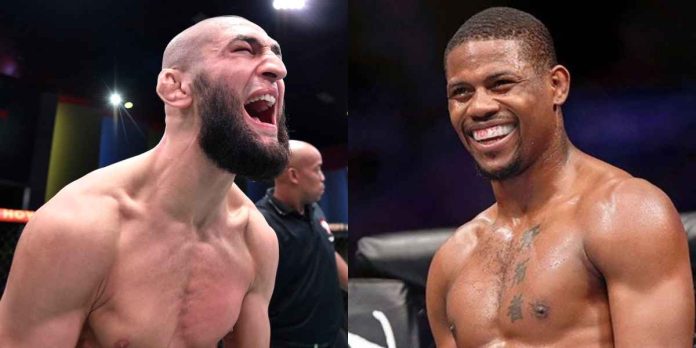 Ahead of his return to the Octagon against Li Jingliang at UFC 267 this weekend, Khamzat Chimaev has revealed details of his 2020 hotel altercation with Kevin Holland.

Chimaev and Holland had a run-in at the hotel prior to UFC Vegas 11, where both fought and won their fights against Gerald Meerschaert and Darren Stewart respectively. ‘Borz’ said that he wasn’t pleased with some of the comments ‘The Trail Blazer’ made on the internet about him, and stopped him at the hotel to warn him against talking smack.

When asked about the incident after the event, Holland said that Chimaev mistook him for hotel staff, and pushed him, adding that he didn’t retaliate because he didn’t want to put his UFC Vegas 11 gig in jeopardy.

Chimaev’s Side Of The Story

During an interview with ZubaTV (as transcribed by BJPenn.com), Chimaev shared his side of the story.

“Holland. He commented something under an Instagram post about me… He wrote something like ‘it’s all good but where’s your mask? You can infect him.’ Something like that,” Chimaev explained. “I came up to him in the hotel and asked, ‘What did you mean by that?’ He answered, ‘I don’t really remember but what about it?’ Or something like that. I grabbed his neck and pushed him away. Then, when people were holding me, he started blah blah blah. Typical American thing. Just talking without doing anything.”

Chimaev hasn’t fought since his 17-second knockout win over Meerschaert at UFC Vegas 11, due to long term effects of COVID.

Do you think Khamzat Chimaev will continue his winning ways against Li Jingliang at UFC 267?