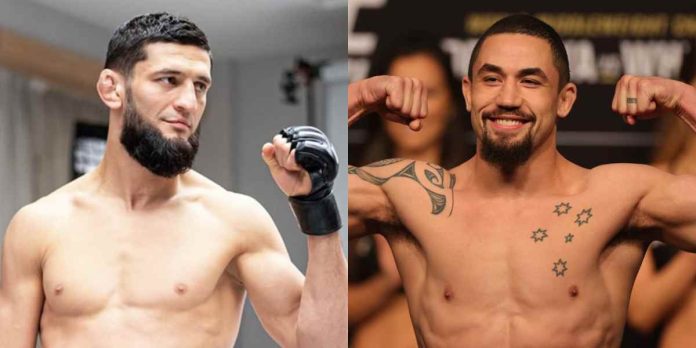 Chimaev had a very animated UFC 279. He was scheduled to headline the card against Nate Diaz but was demoted to the co-main event against Kevin Holland after missing the welterweight limit by 7.5 pounds. The Chechen-Swede didn’t let his troubles get in his head however and continued his winning ways with a trademark win over the American, submitting him in the first round without absorbing a single shot.

During the UFC 279 post-fight press conference (as transcribed by MMA Junkie), Chimaev said that he would “smash everybody” but he has a soft side for one UFC fighter.

“I want to train with that guy. He’s really good, like one of the best guys in the world. I was watching his fight. … I’m a big fan, so I watch all things. I watch how he trains, and all these things. A lot of guys want to fight me, so Robert never said something bad about me. There’s a lot of guys talking s*** about me. I’m gonna go take their heads off, you know? So, we’ll see.”

With Chimaev missing weight by a big margin, he might consider a middleweight bout next, with Whittaker fight being a possibility. ‘Borz’ said that he doesn’t care who he fights next however.

Who do you think would win a potential fight between Khamzat Chimaev and Robert Whittaker?