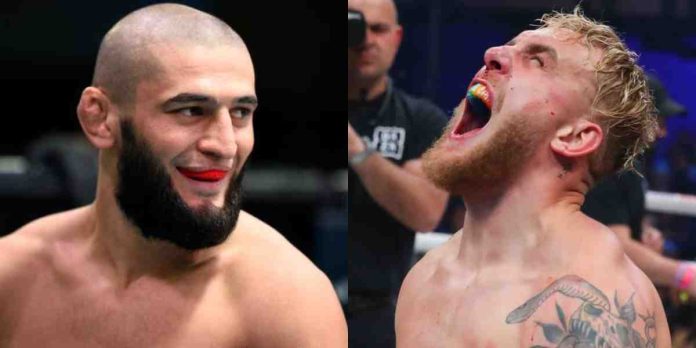 Jake Paul has fired back at Khamzat Chimaev for saying that he could ‘smash’ him and his brother Logan Paul on the same night.

Chimaev made his return to the Octagon earlier this month at UFC 267, where he dispatched Li Jingliang in under four minutes to continue his winning ways. He’s now pushing for a showdown with Nate Diaz, but isn’t also ruling out a boxing payday.

On Tuesday, Chimaev took to Twitter to take aim at the Paul brothers, saying that “I can smash this guys same night.”

While Logan hasn’t responded yet, Jake fired back at Chimaev by telling him that he was just another fighter in the UFC pretending to be able to box.

“Listen Kumquat… you are just another UFC fighter pretending you can box. Sit down, shut up and pray you get paid fairly,” Paul said.

Chimaev laughed off Jake’s jibes and suggested that the entertainer was “number one bulls***.”

He then tweeted a meme poking fun at the Paul brothers.

Jake, who is 4-0 as a professional boxer, is coming off back-to-back wins against former Bellator and ONE Championship titleholder Ben Askren and former UFC welterweight champion Tyron Woodley. ‘The Problem Child’ will face Tommy Fury on December 18th next.

Logan hasn’t garnered as much success as his younger brother in boxing, losing to fellow YouTuber KSI in his only professional bout. He managed to land a big-money boxing exhibition against Floyd Mayweather in July however, and is now rumoured to face Mike Tyson in February.

Would you like to see Khamzat Chimaev fight Jake or Logan Paul in the boxing ring?