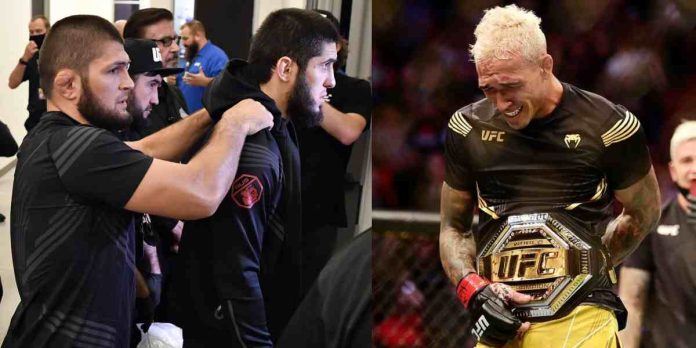 Khabib Nurmagomedov has given his thoughts on the vacant lightweight title fight between Charles Oliveira and Islam Makhachev, set to headline UFC 280.

Oliveira will face Makhachev in the UFC 280 main event to reclaim his title, which he lost after missing weight by half a pound for his lightweight title fight against Justin Gaethje at UFC 274, where he won by first round submission in a back-and-forth barnburner. The Brazilian wanted to fight Conor McGregor for the vacant title, but with the Irishman’s fighting future still up in the air, the UFC took a different route.

‘Do Bronx’ is currently on an eleven fight winning streak and has defeated everyone currently sitting in the lightweight top five other than Makhachev, who has looked untouchable en route to a ten fight winning streak. The Russian has finished all of his last four opponents, most recently Bobby Green at UFC Vegas 49. His impressive winning streak is often undermined due to zero top five wins, but Khabib believes that will change when his best friend faces his toughest challenge to date at UFC 280.

Khabib Nurmagomedov On Oliveira vs Makhachev

In a recent Instagram post, Khabib said that he’s very excited about his longtime friend fighting for the title against the best lightweight in the world.

“I get goosebumps from anticipation,” Khabib said. “Islam Makhachev is coming out for this fight against the best fighter at the moment in UFC. Oliveira is the best fighter of 2022. He is one of the best, regardless of the weight category, also goes on a eleven-win streak in the UFC. This fight will answer all questions. Someone reads history, and someone writes it. Get your excuses ready, we are aiming to beat Oliveira early InshaAllah.”