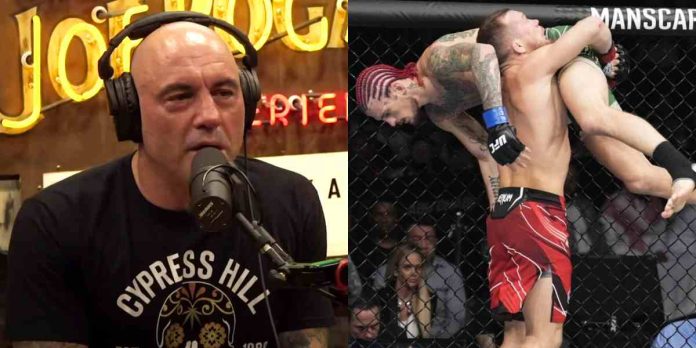 Joe Rogan has given his thoughts on Sean O’Malley’s controversial split-decision victory over Petr Yan at UFC 280.

O’Malley passed the toughest test of his career in Yan by a very thin margin at UFC 280. The first round was razor close with both men having their moments. ‘No Mercy’ utilised his wrestling a lot more in the second round and combined striking with takedowns to outpoint his opponent, but ‘Suga’ Sean bounced back in a big way in the third round, landing a flying knee that cut and hurt the former bantamweight champ.

Despite a close fight, many believe Yan had done enough to earn the win until Bruce Buffer announced O’Malley the winner by split decision, to the surprise of many. Joe Rogan also thought Yan won the fight, but speaking on his ‘The Joe Rogan Experience’ podcast (as transcribed by MMA Junkie), he said he wondered if the Russian’s takedowns were of any value because he failed to control the American.

“He was certainly in it against Petr Yan, who’s a former champion and one of the best in the division, by far the No. 1 contender,” Rogan said. “It was a very close fight, and he definitely hurt Petr on multiple occasions, caught him with that big knee, rocked him. The question is: How much is the takedown worth? How much is control worth?

“Takedowns without damage, what is that value? I’m not denying that I thought Petr Yan won, because I did think he won at the end of it. But takedowns without damage vs standup with damage, because ‘Sugar’ landed more strikes standing and had big moments. Yan had some big moments, too, one big left hand that rocked him. The question is: How valuable are those takedowns, and how valuable is that top game and that control?”