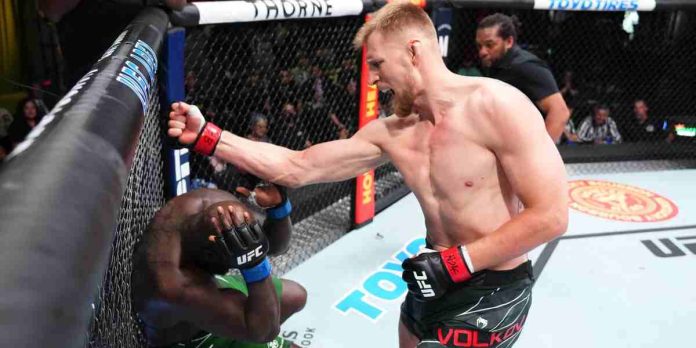 Jairzinho Rozenstruik wasn’t happy with Herb Dean’s stoppage in his first round TKO loss to Alexander Volkov in the UFC Vegas 56 main event this past weekend.

The fight lasted a little over two minutes, with both fighters feeling each other out in the first 60 seconds. Rozenstruik upped the ante in the second minute with a tornado of strikes without much success, before the Russian backed him up against the cage and landed a clean right hand that wobbled him. ‘Drago’ followed up with a flurry of strikes, forcing Dean to intervene and wave off the contest, much to the disappointment of ‘Bigi Boy’.

In a couple of tweets, Rozenstruik said that he believes the fight was stopped early, but hopes to make a quick turnaround.

“I’m kinda confused on how the fight went and I’m disappointed that it was stopped,” Rozenstruik said. “It definitely was a troubling situation, but I was far from giving up the fight. Did someone lay flat on the ground with his eyes shut? That’s what we call a knockout. Alexander and I basically just started exchanging some heavy strikes. The stuff you all wanted to see. Big up to Volkov for taking the fight. I’ve no noticeable damage and I like to fight soon.”

Volkov defended the stoppage during the UFC Vegas 56 post-fight press conference, saying that Rozenstruik was in a bad position and wouldn’t have escaped.

Do you agree with Jairzinho Rozenstruik that his fight against Alexander Volkov was stopped early?