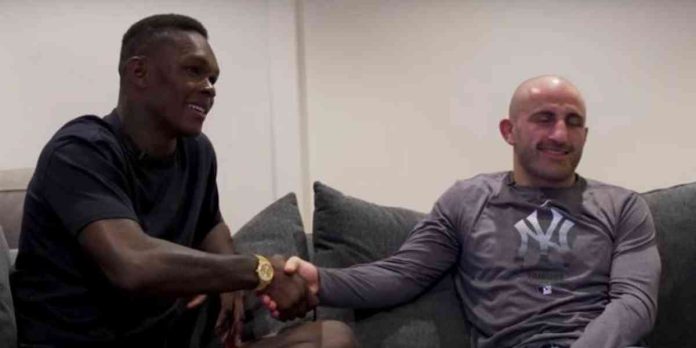 Israel Adesanya is ready to bet his house on Alex Volkanovski beating Islam Makhachev to become a two-division UFC champion.

The featherweight champion will make his move up to lightweight to face his counterpart Makhachev at UFC 284 in Australia. The Dagestani won the belt in October at UFC 280, where he submitted Charles Oliveira in the second round. In his post-fight Octagon interview, the Russian challenged the Aussie, who accepted it without giving it a second thought.

Although Makhachev has opened as the betting favourite ahead of the blockbuster matchup, Adesanya is ready to bet his house on his teammate Volkanovski.

Israel Adesanya On Makhachev vs Volkanovski

During a recent appearance on the FLAGRANT podcast (as transcribed by MMA News), Adesanya said that he is backing his teammate to beat Makhachev.

“Volk used to be a fat guy. Like, a big boy, brawley, played rugby. When you walk around with that kind of body mass for years, you develop a different kind of muscle density,” Adesanya said. “Even with Volk, I’ve tried to hold him down. I’m not the greatest wrestler, but even with my frame and leverage, it’s hard. He finds his way back up. (He’s) a crafty veteran. His inside leg kick, his jabs, his hand control; all that s***, he’s crafty.

“Islam is great. These Dagi boys, they know what they’re doing… But I truly, gun to my head, could bet my whole house on him. Volk is just different. Volk is the kind of guy — even when he cuts weight, the amount he cuts, for him to have the cardio he has in the later rounds… it’s mind-blowing. The man’s different.”

Do you agree with Israel Adesanya that Alex Volkanovski will beat Islam Makhachev at UFC 284?