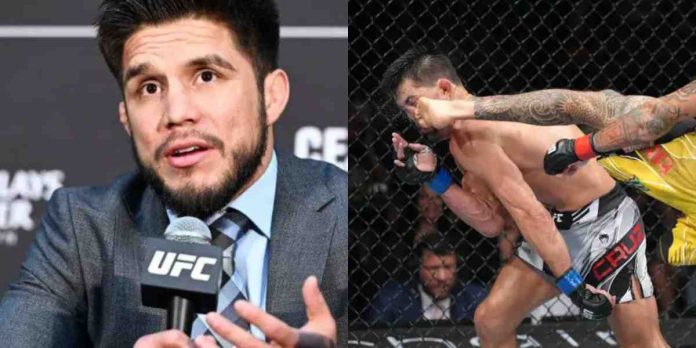 Henry Cejudo doesn’t believes his one time opponent Dominick Cruz should retire after suffering a brutal knockout loss at the hands of Marlon Vera at UFC San Diego.

Cruz’s title aspirations suffered a major setback this past weekend at UFC San Diego, where he was brutally knocked out by Vera in the fourth round of their headliner. ‘The Dominator’ started off well, out striking his opponent with his quick footwork and combinations. ‘Chito’ scored a knockdown in the first round, but wasn’t able to capitalise on it.

Vera found his rhythm from the third round onwards, as he landed heavy shots at regular intervals, knocking his opponent down for the second time, before finishing the fight in the fourth round with a brutal kick to the face. In an Instagram post after the fight, Cruz said that he was feeling great and will return soon to fulfill his broadcast duties.

In a recent video posted on Twitter, Cejudo said that he thinks Cruz shouldn’t retire as he looked good up until the knockout, and has a couple of very interesting options at bantamweight.

Last month, Edgar revealed that he would love to lock horns with Cruz for his next fight, which he said will be his last.

Do you agree with Henry Cejudo that Dominick Cruz should consider fighting the likes of Frankie Edgar and Jose Aldo?