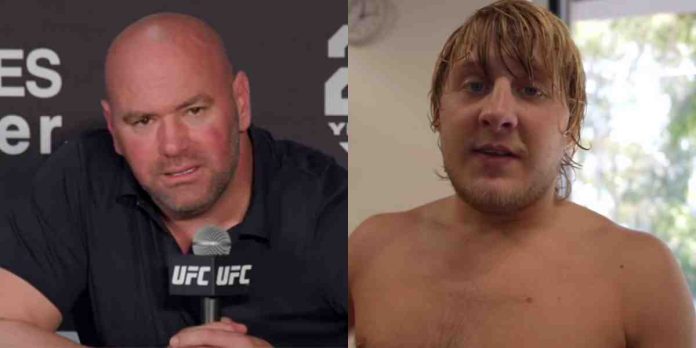 Dana White isn’t a fan of Paddy Pimblett gaining a massive amount of weight in between fights as he believes it affects both him and the promotion.

Pimblett improved to 3-0 in the UFC with a second round submission victory over Jordan Leavitt at UFC London last month. Within a few weeks, the promotion’s most popular lightweight prospect has ballooned up to 200 pounds, he told reporters on the sidelines at UFC San Diego this past weekend.

‘The Baddy’ has been criticised by the likes of ‘Cowboy’ Cerrone and Chael Sonnen in the past for letting himself go, as they believe he won’t last long if he doesn’t mend his ways. Dana also believes the same.

Speaking to the media, including MMA Junkie, Dana said that Pimblett ballooning up after fights makes things tough for the UFC matchmakers.

“It’s not good for you,” Dana said. “We all know that. We know that fluctuating and cutting that much weight is very bad, and it definitely doesn’t prolong your career. It’s tough on your body and your organs and stuff like that, but listen: He’s a grown man. He can do whatever the hell he wants to do.

“It makes it tough for us too, because when we’re in the matchmaking room, we want to throw together a fight, maybe we can throw him on a card in a month, a month-and-a-half, it hurts us too. We have to be very specific when we plan fights for him, because he’s nowhere near close to weight, and what you don’t want to do is put that kind of pressure to cut that much weight in that short amount of time.”

Who do you think Paddy Pimblett should fight next?