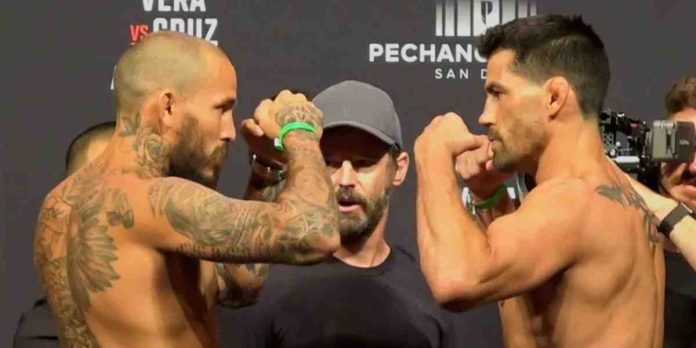 UFC San Diego went down on Saturday at the Penchanga Arena in San Diego, California. In the main event, Marlon Vera scored the biggest win of his career by knocking out Dominick Cruz in the fourth round. The Ecuadorian fought patiently for the first two rounds, before upping the ante from the third round onwards, catching the former bantamweight champion with a brutal kick to the face halfway through the fourth frame.

In the co-main event, Nate Landwehr pulled off the upset by securing a majority decision victory over David Onama. Elsewhere on the UFC San Diego main card, undefeated strawweight prospect Yazmin Jauregui continued her winning ways with a unanimous decision win over Iasmin Lucindo. Both fighters were making their UFC debuts.

Azamat Murzakanov also kept his perfect record intact by stopping Devin Clark in the third round, Priscila Cachoeira improved to two wins in a row with a first round stoppage win over Ariane Lipski and Gerald Meerschaert bounced back from a recent loss by submitting Bruno Silva in the third round.