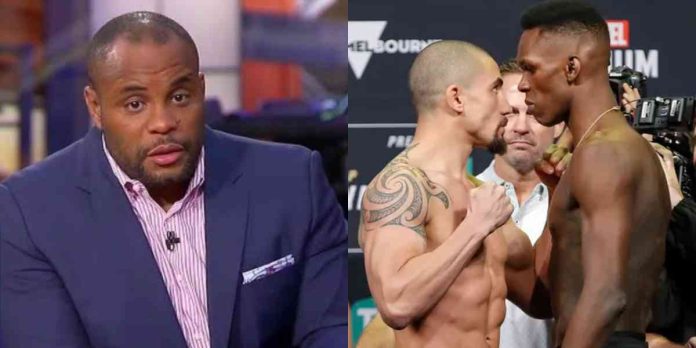 Daniel Cormier has given his thoughts on the middleweight title rematch between champion Israel Adesanya and Robert Whitaker, set to headline UFC 271 next month.

Adesanya has defended his title three times, against Yoel Romero, Paulo Costa, and Marvin Vettori since winning the belt by stopping Whittaker in the second round at UFC 243. ‘The Reaper’ has won thrice since losing to his arch-rival, beating Darren Till, Jared Cannonier, and Kelvin Gastelum.

Whittaker has on multiple occasions admitted he let his emotions get the better of him when he fought Adesanya at UFC 243, but he said that he will approach things differently in their rematch, and capitalise on any openings to take the fight to the ground.

Cormier On Adesanya vs Whittaker 2

Speaking to Helen Yee, Cormier said that Whittaker has made significant improvements to his game since his loss to Adesanya and their rematch will be a different fight.

“I think it’ll be much more competitive,” Cormier said. “I think Robert Whittaker took time away and in the fights he’s shown improvement. I don’t know how you improve when you’re Whittaker and you defended the belt so many times and you were the champion and you were all these great things but you’re still getting better and he showed that in his last couple fights. He’s really improving, he’s still getting better and I think being in there with Adesanya, I think a lot of that nervous energy that he may have felt in that fight is not going to be as prevalent, you know. He won’t feel like he needs to rush, he’ll be more patient, he’ll be more willing to take his time in his approach.”

Do you think Robert Whittaker will reclaim his title by defeating Israel Adesanya at UFC 271?