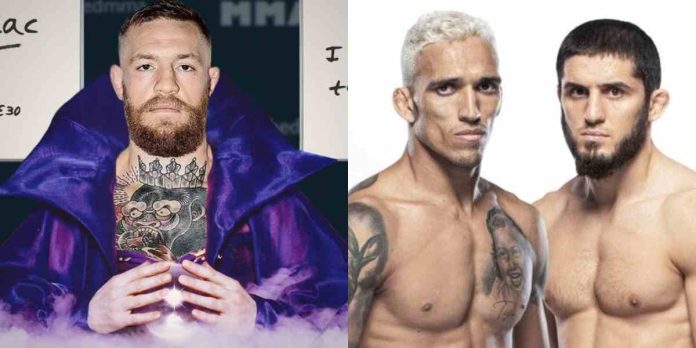 Conor McGregor has given his thoughts on the vacant lightweight title fight between Charles Oliveira and Islam Makhachev, set to headline UFC 280 this month.

Oliveira was stripped of the title after missing weight by only half a pound for his lightweight title fight against Justin Gaethje at UFC 274, where he won by first round submission. Despite not officially being the UFC 155-pound champ, ‘Do Bronx’ is widely regarded as the uncrowned champion of the division. The Sao Paulo native himself believes his fight against the Dagestani will be a title defence.

Makhachev’s team believes he is the uncrowned champ of the division. His coach, Javier Mendez, went as far as saying that the 31-year-old is the greatest lightweight he’s ever seen, even better than his best friend and teammate, Khabib Nurmagomedov. McGregor is expected to make his comeback early next year, and he is keeping a close eye on the highly-anticipated matchup.

In a Q&A on Twitter, McGregor answered a number of fan questions, including one about the UFC 280 lightweight title fight. In response, the Irishman predicted that the Brazilian will win with ease.

McGregor last fought at UFC 264, where he lost to Dustin Poirier by a doctor’s stoppage after breaking his tibia ten seconds before the end of the first round. The former two-division UFC champion has looked a shell of himself in his last few fights, but is confident of pulling off the “greatest comeback in sports history”.

‘The Notorious’ is also keeping a close eye on the welterweight division, especially with things getting a little more interesting with Leon Edwards’ upset win over Kamaru Usman at UFC 278. McGregor claims that the world has only witnessed a small portion of his true potential.

Who do you think Conor McGregor should fight upon his comeback?