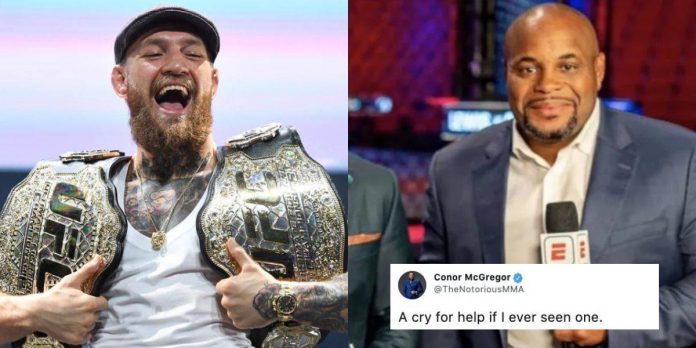 Conor McGregor has turned his guns towards former two-division UFC champion Daniel Cormier for saying that his tweet about Khabib Nurmagomedov’s father was a “cry for help”.

It all started when former UFC lightweight champion Khabib congratulated Dustin Poirier for beating McGregor at UFC 264 in a tweet that said “good always defeats evil”.

Khabib’s tweet prompted an ugly response from McGregor as he targeted the Dagestani’s deceased father, Abdulmanap Nurmagomedov, who died of COVID-related complications in July last year.

Giving his thoughts on the tweet, Cormier said that McGregor crossed the line with his comments about Abdulmanap, which were a cry for help. ‘DC’s’ comments obviously didn’t sit well with the Irishman.

During UFC 265, where Cormier served as a commentator, McGregor tweeted and later deleted this.

In another tweet targeting Cormier in the last few hours, McGregor called him a “fat drunk f***”. The tweet was also deleted later.

The rivalry between McGregor and Khabib dates back to the UFC 223 fight week, where the former champ-champ stormed the Barclays Center in Brooklyn on the media day and attacked a fighter bus carrying his arch-rival, injuring Michael Chiesa and Ray Borg.

McGregor’s attack was in response to Khabib confronting his teammate Artem Lobov, who was also set to compete at UFC 223, a day earlier in the hotel lobby. The pair fought six months later at UFC 229, where ‘The Eagle’ successfully defended his title with a fourth round submission.

Khabib fought twice more after his UFC 229 win, successfully defending his title against Dustin Poirier at UFC 242 and Justin Gaethje at UFC 254 before announcing his retirement. McGregor has fought thrice since then, beating ‘Cowboy’ Cerrone at UFC 246, but losing twice to Poirier, at UFC 257, and UFC 264, where he broke his tibia, resulting in a doctor’s stoppage.

While he wants another go at Poirier, McGregor is expected to spend at least a year on the sidelines due to his injury.

Do you agree with Daniel Cormier that Conor McGregor’s tweet about Khabib Nurmagomedov’s father was a cry for help?