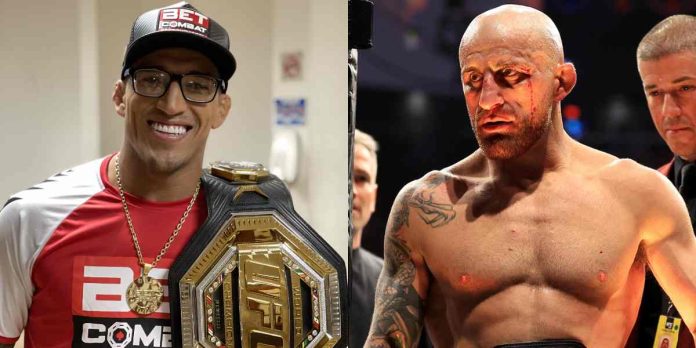 Volkanovski is coming off a dominant unanimous decision win over Max Holloway in their featherweight title trilogy at UFC 276. Having beaten everyone he’s faced so far in his division, the Aussie believes he needs a new challenge and wants to move up to lightweight in the hope of becoming a two division champion.

“I want to be in this Octagon as much as possible,” Volkanovski said in the UFC 276 post-fight press conference. “I want to be busy. I don’t think this division can keep me busy by itself. I want to move up, go for double champ and I’ll keep two divisions busy. So, Charles or whoever gets that belt, nothing but respect [but] I would love to move up, and get double champ status.”

In a recent interview with The Schmo (as transcribed by MMA News), Oliveira said that although Volkanovski is making history at featherweight, he should think twice about making a move up to lightweight because it’s a much tougher division.

“He’s a very tough guy, and I know he has made history [at] 145 pounds,” Oliveira said. “But everybody who thinks about moving up to 155 has to think very well, because it’s a very, very, very hard division.”

Oliveira submitted Justin Gaethje in the first round of their lightweight title fight at UFC 274, but failed to retain his title after missing weight. He is being linked to a vacant title fight with Islam Makhachev at UFC 281 in Abu Dhabi, with Conor McGregor also being an option.

How do you think Alex Volkanovski would fare at lightweight?