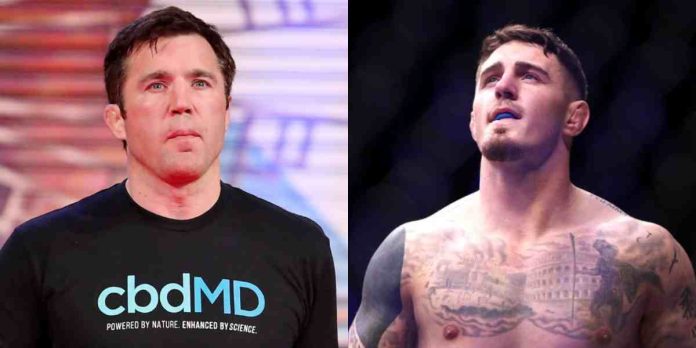 Chael Sonnen believes Tom Aspinall isn’t making the most of his uber impressive performances inside the Octagon.

Aspinall is 4-0 in the UFC, with his most recent victory coming at UFC London, where he steamrolled Alexander Volkov to earn a first round submission victory. The Brit is scheduled to face Curtis Blaydes in a high-stakes heavyweight matchup on July 23rd.

Despite his stellar performances inside the Octagon, Aspinall is keeping his feet on the ground by saying he needs to gain more experience before fighting for the title, and that there are others more deserving of a title shot. In comparison to the likes of Khamzat Chimaev and Paddy Pimblett, the Manchester native isn’t making a lot of noise, and Chael doesn’t like that.

Speaking on his YouTube channel, Sonnen said that Aspinall needs to do a better job of promoting himself.

“Aspinall does interviews like a 13-year-old fan,” Sonnen said. “Aspinall cuts an interview that he should not receive a title shot. Somebody else should, he’s not ready for it. All right, we got a young guy who wants to show a sense of humility, who never should have done an interview that said that. But everybody’s gotta have a mistake before they can make a correction.

“If I had time and he hadn’t pissed me off so bad, I would offer, ‘Don’t ever say anything else, every interview and press conference that you go to, I will show up with a bullhorn and make a whole big scene of it. You stand there and don’t say anything, I will have you fighting for the belt within 12 months.’ That’s the plan anyway, that you’re getting in the way of.”

Do you agree with Chael Sonnen that Tom Aspinall needs to promote himself better?