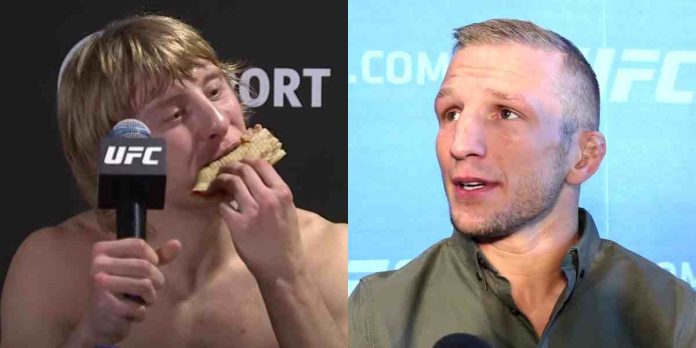 Paddy Pimblett has responded after TJ Dillashaw said that he needs to alter his diet or he’ll never become a UFC champion.

Pimblett, one of the promotion’s hottest prospects, is notorious for being out of shape between fights. In a recent YouTube vlog, the Brit revealed that he has put on a significant amount of weight since his first round submission victory against Kazula Vargas at UFC London, and currently weighs over 200lbs. He needs to get back into fight shape quickly however as he’s scheduled to compete against Jordan Leavitt in their lightweight bout on July 23rd.

‘The Baddy’s’ bad eating habits have drawn a lot of reactions from fans and pros. Speaking on The Schaub Show (as transcribed by MMA Junkie), Dillashaw said that Pimblett will never become a champion if he doesn’t mend his ways.

“He’s just loving diabetes. That’s like a recipe for destroying your body,” Dillashaw said. “I guess there’s one thing when I look at it: They can promote him the right way and do all this good stuff, and he’s got some stuff to grow and get into the higher echelons of the UFC, but if you keep that same work ethic that he has now, he’ll never be a champion.

“You can’t have that down time like that, you can’t get that fat. You can’t get out of shape. It just proves the dedication to what you need to do. I’m not trying to pound on him or anything, but that’s something I think he’s going to have to figure out with age. He’s young. It’s a full-time job. This isn’t just wanting to be a fighter; you have to be a fighter.”

Pimblett clapped back at Dillashaw through Twitter, reminding the former UFC bantamweight champion of the time when he used to sell “fat Tyler” merchandise.

Will Paddy Pimblett continue his winning ways against Jordan Leavitt at UFC London on July 23rd?