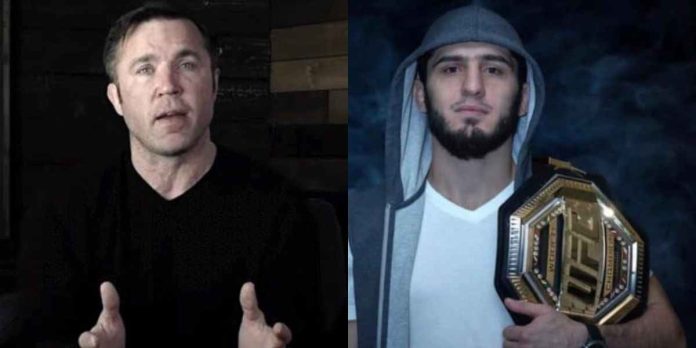 Chael Sonnen has named the UFC lightweight he thinks would give newly crowned champ Islam Makhachev a run for his money.

Makhachev won the lightweight title by submitting Charles Oliveira in the second round of their title fight at UFC 280, and will likely face featherweight champion Alex Volkanovski in a super fight in Australia next February at UFC 284. If he gets past the Aussie, there’s a long list of lightweights waiting for him, including Beneil Dariush and the winner of Dustin Poirier vs Michael Chandler, set to take place at UFC 281.

In a video posted on Twitter (as transcribed by BJPenn.com), Sonnen said that he thinks Chandler would be the toughest test for Makhachev at lightweight due to his wrestling and explosiveness.

“Who can beat Islam? I think Islam looks close to perfect,” Sonnen said. “Who can force Islam to do something different? If we had somebody and they fought all night with Islam and stop Islam from getting on top, could we agree that would be a victory to some degree? Because I don’t think that Islam can go take Michael Chandler down. That’s my belief. I believe that Michael Chandler could stop the takedown. Moreover, if Chandler slips and goes down, I believe that Chandler can get back up onto his feet, turn and face him and start back in neutral.”

Chandler’s UFC career has been a rollercoaster ride. He made a stunning debut by knocking out Dan Hooker in the first round, before suffering back to back losses to Oliveira and Justin Gaethje. ‘Iron’ Michael bounced back with a highlight-reel knockout win over Tony Ferguson, and he said that he hopes to get another title shot if he beats Poirier at UFC 281.