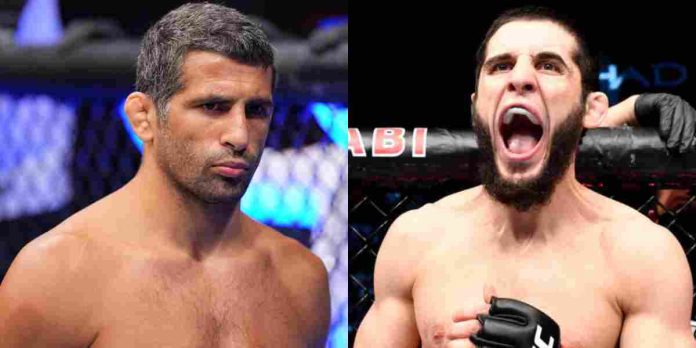 Thiago Moises and Drew Dober have given their thoughts on the highly anticipated lightweight fight between Beneil Dariush and Islam Makhachev, set to headline UFC Vegas 49 on February 26th.

Dariush vs Makhachev is a very exciting matchup between two fighters who are extremely well-rounded, and similar to one another in many ways. Moises and Dober, both of whom have fought the two men involved in the UFC Vegas 49 main event, have given their thoughts on the matchup.

Speaking to James Lynch, Moises predicted that Makhachev will beat Dariush because he is the smarter fighter.

“I think in general [Dariush] has better jiu-jitsu than Islam, maybe not a better wrestler but in striking, I think Dariush has more power,” Moises said. “Islam is a little bit… his fight IQ I think it’s a little bit better, I think that’s gonna be the difference for this fight… [This is a] really hard fight to pick a winner because both guys are very well rounded but I think Islam’s going to win because I think he’s the smartest fighter.”

Dober thinks Dariush will cause a lot of problems for Makhachev because of his risk-taking ability, but believes the Dagestani is still the safer bet.

“I think Beneil is going to give Islam the most problems,” Dober said. “So, it’s a super-tough fight for both guys. And I think one of the cool things with Beneil is like, his strategy. He implements a good strategy, and he’s able to adjust the strategy per round. And he’s a finisher. Like, he can put you away with his hands or a submission. I’m behind him [Dariush] wholeheartedly. But as far as being a betting man, I mean, we see less mistakes from Islam. And so, I was like, Islam is the safest bet. But the heart’s pulling for Beneil.”

Who do you think will win the highly anticipated lightweight title eliminator between Islam Makhachev and Beneil Dariush at UFC Vegas 49?