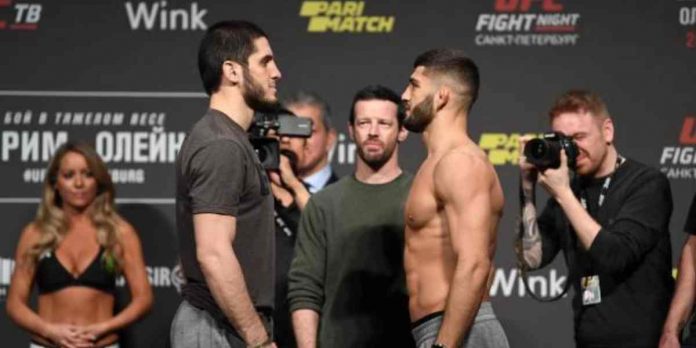 Tsarukyan, who is set to face Christos Giagos at UFC Vegas 37 this weekend, made his UFC debut against Makhachev at UFC Saint Petersburg in 2019, where he lost by unanimous decision but was praised for giving the Dagestani a run for his money on short notice.

Makhachev, who will face Rafael dos Anjos at UFC 267 in October, currently sits at the number five spot in the rankings, but Tsarukyan believes he’s a lot better than everyone ranked above him.

Speaking to James Lynch, Tsarukyan said that Makhachev is the best fighter in the lightweight top 15, despite the likes of Dustin Poirier, Justin Gaethje, Beneil Dariush and Michael Chandler ranked above him.

“In my opinion, he’s the best in the top 15,” Tsarukyan said. “He’s very strong but it will be the best fight for me because I wanna do the rematch. I wanna have a full training camp. I wanna do everything right. I got better you know, I’m getting better every day and I can beat him now. I have four fights already [in the UFC] but everyone [always talks about] my first fight.”

Makhachev is currently riding an eight-fight win streak, with his most recent victory coming against Thiago Moises by third round submission in the UFC Vegas 32 main event.

Former lightweight champion Khabib Nurmagomedov believes his close friend Makhachev is only a couple of wins away from getting his hands on the title, while Dustin Poirier believes the 29-year-old would be his toughest test.

Do you agree with Arman Tsarukyan that Islam Makhachev is the best in the lightweight top 15?